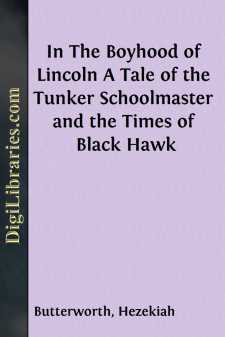 Abraham Lincoln has become the typical character of American institutions, and it is the purpose of this book, which is a true picture in a framework of fiction, to show how that character, which so commanded the hearts and the confidence of men, was formed. He who in youth unselfishly seeks the good of others, without fear or favor, may be ridiculed, but he makes for himself a character fit to govern others, and one that the people will one day need and honor. The secret of Abraham Lincoln's success was the "faith that right makes might." This principle the book seeks by abundant story-telling to illustrate and make clear.

In this volume, as in the "Log School-House on the Columbia," the adventures of a pioneer school-master are made to represent the early history of a newly settled country. The "Log School-House on the Columbia" gave a view of the early history of Oregon and Washington. This volume collects many of the Indian romances and cabin tales of the early settlers of Illinois, and pictures the hardships and manly struggles of one who by force of early character made himself the greatest of representative Americans.

The character of the Dunkard, or Tunker, as a wandering school-master, may be new to many readers. Such missionaries of the forests and prairies have now for the most part disappeared, but they did a useful work among the pioneer settlements on the Ohio and Illinois Rivers. In this case we present him as a disciple of Pestalozzi and a friend of Froebel, and as one who brings the German methods of story-telling into his work.

"Was there ever so good an Indian as Umatilla?" asks an accomplished reviewer of the "Log School-House on the Columbia." The chief whose heroic death in the grave of his son is recorded in that volume did not receive the full measure of credit for his devotion, for he was really buried alive in the grave of his boy. A like question may be asked in regard to the father of Waubeno in this volume. We give the story very much as Black Hawk himself related it. In Drake's History of the Indians we find it related in the following manner:

"It is related by Black Hawk, in his Life, that some time before the War of 1812 one of the Indians had killed a Frenchman at Prairie des Chiens. 'The British soon after took him prisoner, and said they would shoot him next day. His family were encamped a short distance below the mouth of the Ouisconsin. He begged permission to go and see them that night, as he was to die the next day. They permitted him to go, after promising to return the next morning by sunrise. He visited his family, which consisted of a wife and six children. I can not describe their meeting and parting to be understood by the whites, as it appears that their feelings are acted upon by certain rules laid down by their preachers!—while ours are governed only by the monitor within us. He parted from his wife and children, hurried through the prairie to the fort, and arrived in time. The soldiers were ready, and immediately marched out and shot him down!' If this were not cold-blooded, deliberate murder on the part of the whites I have no conception of what constitutes that crime....