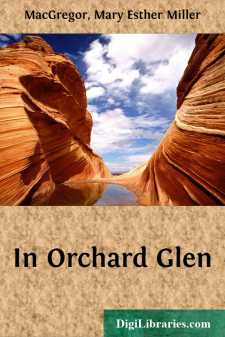 It was on Christina Lindsay's nineteenth birthday that she made the second Great Discovery about herself. The first one had been made when she was only eleven, and like the second it had proved an unpleasant surprise.

It was midsummer holidays, that time when she was only eleven, and raspberry time too, and Christina and her brother Sandy were picking berries in the "Slash," a wild bit of semi-woodland away up on the hills that divided her home farm from the land of the Grant Sisters. The Grant Girls—they were all three over fifty but everybody rightly called them girls,—the Grant Girls were there picking berries too, with Mrs. Johnnie Dunn, and several other friends; and there were many more groups scattered here and there through the green tangle of bushes and saplings. For a berry-patch was community property, and when the crop was plentiful, as it was this year, a berry-picking became a pleasant social function, where one met friends from near and far, and picnicked with them under the trees.

Christina was working with furious speed. She and Sandy had been racing all morning to see who would be the first to fill a four-quart pail. For Uncle Neil had promised the winner unheard-of wealth, a whole quarter of a dollar to spend as one wished, and Christina was determined that the money should be hers.

She had found a wonderful patch and was fairly pouring the berries into her pail in a red and black shower. She was keeping well down behind a clump of alder, too, out of range of Sandy's roving eye. For Sandy had a habit of allowing you to find the best place, and then swooping down upon it like a plague of grasshoppers. She was working so hard that she did not notice a group of berry pickers who had taken up their station right opposite her on the Grant side of the low fence, and was suddenly attracted by the discovery that they were discussing her own family.

"Them Lindsay lassies are that bonnie, I jist like to sit and look at them, even in church when I ought to be looking at my Bible."

It was Miss Flora Grant's soft voice that came through the screen of sumach and alder.

"They've all taken after their mother's folks." It was Miss Elspie's still softer voice. "The MacDonald women of that family was all good lookin'."

"Well, my grief! You don't call that long-legged youngest thing good-lookin', do you?" sang out the loud voice of Mrs. Johnnie Dunn. "She's as homely as a day-old colt!"

The long-legged youngest thing nearly jumped out of her hiding place on the other side of the bushes. She caught a fleeting glimpse of the last speaker, her long, thin neck and green sunbonnet sticking up out of a tangle of bushes, like a stinging nettle in a garden.

"Oh, you mean little Christina," said Flora Grant gently, "I jist didn't mind about her. No, she's a nice bit lassock, but she's not bonnie. Eh, Sarah, jist look at yon patch over there; the bushes is jist as rid as roses!"

They all moved away with a sound of tearing briars, and the Lindsay lass that was not bonnie crawled deeper into her leafy hiding-place, making a brave effort to choke back something that was causing her throat to swell and her eyes to smart....