Impressions of a War Correspondent 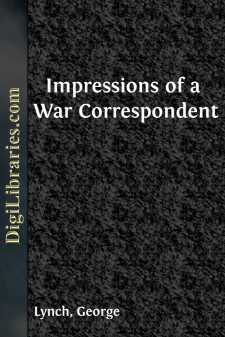 There are few people in the world who have more opportunity for getting close to the hot, interesting things of one's time than the special correspondent of a great paper. He is enabled to see "the wheels go round;" has the chance of getting his knowledge at first hand. In stirring times the drama of life is to him like the first night of a play. There are no preconceived opinions for him to go by; he ought not to, at least, be influenced by any prejudices; and the account of the performance is to some extent like that of the dramatic critic, inasmuch as that the verdict of the public or of history has either to confirm or reverse his own judgment. There is a peculiar and unique fascination about this reading of contemporary history, as it grows and develops while one peers with straining eyes through one's glasses. There is something like a first night, too, about the way the critics view things. Sometimes great difference of opinion. I recollect the afternoon of Nicholson's Nek—Black Monday, as it was afterwards called—when we returned into Ladysmith half the correspondents seemed to be under the impression that the day had been quite a successful one; while, on the other hand, one had headed his despatch with the words, "Dies Iræ, dies illa!" To get to the heart of things; to see the upspringing of the streams of active and strenuous life; to watch the great struggles of the world, not always the greatest in war, but the often more mighty, if quiet and dead silent, whose sweeping powerfulness is hidden under a smooth calmness of surface—to watch all this is to intimately taste a great delicious joy of life. The researches of the historian of bygone times are fascinating—absorbingly fascinating, although he is always handicapped by remoteness; but the historian of to-day—of his day—this day—whose day-page of history is read by hundreds of readers, the day after has set to him a task that calls for all, and more than all, that he can give—stimulates while it appalls, and would be killingly wearying if it were not so fascinatingly attractive. That close contact with the men of this struggling world, and the men who do things, and shove these life-wheels round, warms up in one a great love for one's kind—a comrade feeling, like that which comes from being tent-mates in a long campaign. Two o'clock in the morning wake to the tramp, tramp of men marching in the dark—marching out to fight—and the unknown Tommy you march beside and talk to in low voice, as men talk at that hour, is your comrade unto the day's end of fighting; when returning, to the sentries' challenge you answer "A friend," and, dog-tired, you re-enter the lines, welcomed by his sesame call, "Pass, friend; all is well."

IMPRESSIONS OF A WAR CORRESPONDENT I THE DANCE OF DEATH

Death from a Mauser bullet is less painful than the drawing of a tooth. Such, at least, appears to be the case, speaking generally from apparent evidence, without having the opportunity of collecting the opinions of those who have actually died....