Illustrated History of Furniture From the Earliest to the Present Time 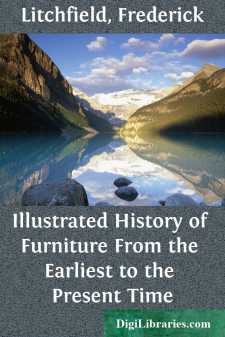 he first reference to woodwork is to be found in the Book of Genesis, in the instructions given to Noah to make an Ark of gopher wood, "to make a window," to "pitch it within and without with pitch," and to observe definite measurements. From the specific directions thus handed down to us, we may gather that mankind had acquired at a very early period of the world's history a knowledge of the different kinds of wood, and of the use of tools.

We know, too, from the bas reliefs and papyri in the British Museum, how advanced were the Ancient Egyptians in the arts of civilization, and that the manufacture of comfortable and even luxurious furniture was not neglected. In them, the Hebrews must have had excellent workmen for teachers and taskmasters, to have enabled them to acquire sufficient skill and experience to carry out such precise instructions as were given for the erection of the Tabernacle, some 1,500 years before Christ—as to the kinds of wood, measurements, ornaments, fastenings ("loops and taches"), curtains of linen, and coverings of dried skins. We have only to turn for a moment to the 25th chapter of Exodus to be convinced that all the directions there mentioned were given to a people who had considerable experience in the methods of carrying out work, which must have resulted from some generations of carpenters, joiners, weavers, dyers, goldsmiths, and other craftsmen.

A thousand years before Christ, we have those descriptions of the building and fitting by Solomon of the glorious work of his reign, the great Temple, and of his own, "the King's house," which gathered from different countries the most skilful artificers of the time, an event which marks an era of advance in the knowledge and skill of those who were thus brought together to do their best work towards carrying out the grand scheme. It is worth while, too, when we are referring to Old Testament information bearing upon the subject, to notice some details of furniture which are given, with their approximate dates as generally accepted, not because there is any particular importance attached to the precise chronology of the events concerned, but because, speaking generally, they form landmarks in a history of furniture. One of these is the verse (Kings ii. chap. 4) which tells us the contents of the "little chamber in the wall," when Elisha visited the Shunamite, about B.C. 895; and we are told of the preparations for the reception of the prophet: "And let us set for him there a bed and a table and a stool and a candlestick." The other incident is some 420 years later, when, in the allusion to the grandeur of the palace of Ahashuerus, we catch a glimpse of Eastern magnificence in the description of the drapery which furnished the apartment: "Where were white, green, and blue hangings, fastened with cords of fine linen and purple, to silver rings and pillars of marble; the beds were of gold and silver, upon a pavement of red and blue and white and black marble." (Esther i....