If, Yes and Perhaps Four Possibilities and Six Exaggerations with Some Bits of Fact 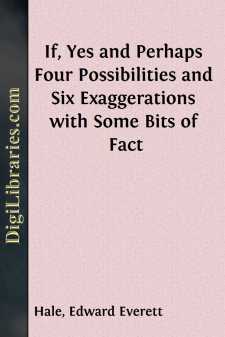 The title to this book has met with general opprobrium, except in a few quarters, where it was fortunately regarded as beneath contempt. Colonel Ingham even exacted an explanation by telegraph from the Editor, when he learned from the Governor-General of Northern Siberia what the title was. This explanation the Editor gave in the following note. It is, however, impossible to change the title, as he proposes. For reasons known to all statesmen, it is out of the question to swap horses in crossing a river; and all publishers know that it is equally impossible to change titles under those circumstances.

I have your note complaining of the sensational title, "somewhat affected," as you think, which I gave to our little story-book. Of course I am sorry you do not like the name; but, while you strike, I beg you to hear.

I readily acceded to your original title, and called the book in manuscript as you bade me,—

"A Few Short Sketches taken from Ancient History, Modern Travel, and the Realm of Imagination, Illustrative of the Poetry of the Bible, the History of Christianity, the Manners of the Times, and the Politics of the Present and Past Generations."

This title would, I admit, meet the views of most of our present critics. But I abandoned it on my own responsibility,—you being then beyond the telegraph, at the mouth of the Oby River,—because it occurred to me, that, under the catalogue rules of Panizzi and the lamented Jewett, we should be indexed and catalogued at "Few." I did not think that a good omen.

But, as I slept and waked on this, I said, "Who knows that these are moral sketches?" We wished them to be moral, but Ingham's have been attacked by such patient critics as read them as being immoral, while many of the sketches seem to have no moral at all. Who are we, to claim that we have attained a moral standard?

Waking and sleeping once more, I asked myself, "What are the things,—poor, nameless heathen children, that can get no sponsor and no Christian baptism?"

"Might, Could, Would, or Should," then, would have been an available name for most of them,—unless one took from the older grammars the title of "The Potential Mood."

But, you observe, my dear Ingham, that our little story-book is destined mostly for young readers, who know no more of "The Potential Mood" than they know of the surrender of Cornwallis (this day celebrated). And, besides, we have some facts in the treatise which are not hypothetical. Why ignore them? Do you not see that your miserable suggestion of "The Potential Mood" is as worthless as it is sensational and fails as not comprehensive, inadequate, unintelligible, and not true?

For these reasons I settled on the plain, straightforward title of unadorned truth, viz. "Four Possibilities, Six Exaggerations, and some Bits of Fact"; and with this we went to the publisher. But, as I entered his shop, a boy from Dutton's rushed in with his order-book, and cried:—

"What," said I, "if, by any good fortune, it had been our story-book that was wanted, this boy would then have called for

"'Seventy Four Possibilities.' Can there be so many in a world which runs in grooves?...