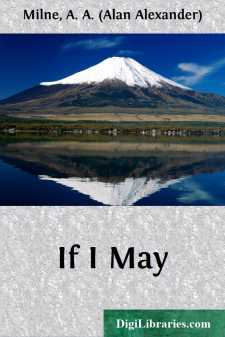 IF I MAY The Case for the Artist

By an “artist” I mean Shakespeare and Me and Bach and Myself and Velasquez and Phidias, and even You if you have ever written four lines on the sunset in somebody’s album, or modelled a Noah’s Ark for your little boy in plasticine. Perhaps we have not quite reached the heights where Shakespeare stands, but we are on his track. Shakespeare can be representative of all of us, or Velasquez if you prefer him. One of them shall be President of our United Artists’ Federation. Let us, then, consider what place in the scheme of things our federation can claim.

Probably we artists have all been a little modest about ourselves lately. During the war we asked ourselves gloomily what use we were to the State compared with the noble digger of coals, the much-to-be-reverenced maker of boots, and the god-like grower of wheat. Looking at the pictures in the illustrated papers of brawny, half-dressed men pushing about blocks of red-hot iron, we have told ourselves that these heroes were the pillars of society, and that we were just an incidental decoration. It was a wonder that we were allowed to live. And now in these days of strikes, when a single union of manual workers can hold up the rest of the nation, it is a bitter refection to us that, if we were to strike, the country would go on its way quite happily, and nine-tenths of the population would not even know that we had downed our pens and brushes.

If there is any artist who has been depressed by such thoughts as these, let him take comfort. We are all right.

I made the discovery that we were all right by studying the life of the bee. All that I knew about bees until yesterday was derived from that great naturalist, Dr. Isaac Watts. In common with every one who has been a child I knew that the insect in question improved each shining hour by something honey something something every something flower. I had also heard that bees could not sting you if you held your breath, a precaution which would make conversation by the herbaceous border an affair altogether too spasmodic; and, finally, that in any case the same bee could only sting you once--though, apparently, there was no similar provision of Nature’s that the same person could not be stung twice.

Well, that was all that I knew about bees until yesterday. I used to see them about the place from time to time, busy enough, no douht, but really no busier than I was; and as they were not much interested in me they had no reason to complain that I was not much interested in them. But since yesterday, when I read a book which dealt fully, not only with the public life of the bee, but with the most intimate details of its private life, I have looked at them with a new interest and a new sympathy. For there is no animal which does not get more out of life than the pitiable insect which Dr. Watts holds up as an example to us.

Hitherto, it may be, you have thought of the bee as an admirable and industrious insect, member of a model community which worked day and night to but one end--the well-being of the coming race....