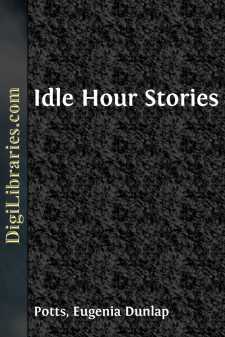 It is some years since I was station-master, telegraph-operator, baggage-agent and ticket seller at a little village near some valuable oil wells.

The station-house was a little distance from the unpretentious thoroughfare that had grown up in a day, and my duties were so arduous that I had scarcely leisure for a weekly flitting to a certain mansion on the hill where dwelt Ellen Morris, my promised wife. In fact, it was with the hope of lessening the distance between us that I had under taken these quadruple duties.

The day was gloomy, and towards the afternoon ominous rolls of thunder portended a storm.

Colonel Holloway, the well-known treasurer of the oil company, had been in the village several days. About one o'clock he came hurriedly into the office with a package, which he laid upon my desk, saying:

"Take care of that, Bowen, till to-morrow. I am going up the road."

The commission was not an unusual one, and my safe was one of Marvin's best. I counted the money, which footed up into the thousands, placed it in the official envelope, affixed the seals, and deposited it in the safe. As I turned away from the lock, a voice at the door said:

"Say, mister, can you tell me the way to the post office?"

A sort of shock went through me at the unexpected presence that seemed to have dropped down from nowhere, and I replied irritably:

"You could not miss it if you tried. Keep straight ahead."

Soon large drops of rain came down, then faster and more furiously, till the air was one vast sheet of water, and little rivers leaped madly along the gullies and culverts. Forked lightning kept pace with the pealing thunder, and heaven's own artillery seemed let loose.

Anything more dismal or dreary could not well be imagined, and gradually the loneliness grew very oppressive. Every straggler had fled to shelter, and the usual idlers had deserted the platform.

But I resolutely set to work at the dry statistics of the station-books, with an occasional call to the wires, which were ticking like mad, so fierce was the electric current.

It was near five o'clock when a long freight train came lumbering by, switched off a car or two, then dragged its slow length onward. This created a brief diversion, then once more I was deserted.

The next passenger train was not due till ten o'clock. I lit the lamps and resigned myself with questionable patience to the intervening hours. An agreeable interruption came in the form of my supper, which was brought in a water-proof basket by a sort of jack-at-all-trades whom we called Jake. Shaking himself like a great dog, he "lowed there wa'n't much more water up yonder nohow."

I had a vague idea of despatching some sort of report to Ellen that I had not been entirely washed away, and obtaining a similar comfort as to her own fate. I little thought how I should need him....