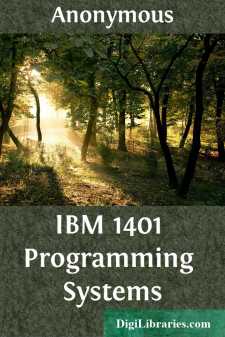 When companies order an IBM 1401 Data Processing System, methods-programming staffs are given the responsibility of translating the requirements of management into finished applications. 1401 Programming Systems are helping cut the costs of getting the computer into operation by simplifying and expediting the work of these methods staffs.

Modern, high-speed computers, such as the 1401, are marvelous electronic instruments, but they represent only portions of data processing systems. Well-tested programming languages for communication with computers must accompany the systems. It is through these languages that the computer itself is used to perform many of the tedious functions that the programmer would otherwise have to perform. A few minutes of computer time in translating the program can be equal to many, many hours of staff time in writing instructions coded in the language of the computer.

The combination of a modern computer plus modern programming languages is the key to profitable data processing. This brochure explains modern IBM Programming Languages and their significance to management.

: Here an operator points to machine language instructions for a new application being generated by the 1401 system on the 1403 high-speed printer. Statements about the application which were written by the programmer are being translated internally to machine-coded language.

A program is a series of instructions that direct the 1401 as it solves an application.

"What Is A Stored Program Machine?"

There are two types: (1) Systems that provide the programmer with a simplified vocabulary of statements to use in writing programs, and (2) Pre-written programs, which take care of many of the everyday operations of the 1401.

What 1401 Programming Systems Mean To Management:

Programmers can concentrate on the application and results rather than on a multitude of "bookkeeping" functions, such as keeping track of storage locations.

Programmers use a language more familiar to them rather than having to learn detailed machine codes.

Many pre-written programs are supplied by IBM, eliminating necessity of customers' staffs writing their own.

Pre-written programs have already been tested by IBM, reducing tedious checking operations on the computer.

Programs are written in symbolic or application-oriented form instead of computer language. This enables management to communicate more easily with the programming staff.

Routines such as those designed for report writing permit faster translation of management requirements into usable information.

These systems permit programs to be written using meaningful names (symbols) rather than actual machine language.

This is an advanced symbolic programming system....