Hypolympia Or, The Gods in the Island, an Ironic Fantasy 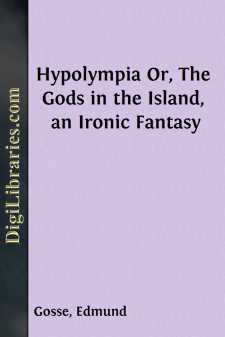 A terrace high above the sea, which is seen far below, through vast masses of woodland. Steps lead down towards the water, from the centre of the scene. To the left, a large, low country-house, of unpretentious character, in the style of the late eighteenth century. Gardens belonging to the same period, and now somewhat neglected and overgrown, stretch on either side. The edge of the terrace is marked by a stone balustrade, with a stone seat running round it within. At the top of steps, ascending, appear Aphrodite and Eros.]

A moment, Eros. Let us sit here. What can this flutter at my girdle be? I breathe with difficulty. Oh! Eros, can this be death?

Death? Ah! no; you have roses in your cheeks, mother. Your lips are like blood.

It must be weariness. Ever these new sensations, these odd, exciting apprehensions! This must be mortality. I never breathed the faster as I rose from terrace to terrace in Cythera.

Yet this is like Cythera—a little like it. [Looking round.] It is not the least like it. These round billowy woods, that grey strip of sea far below, the long smooth land with square yellow fields and pointed brown fields, and the wild grey sky above. No; it would be impossible for anything to be less like Cythera.

Yet it is like it. [Gazing round.] How strange ... to be where everything is not azure and gold and white—white land, gold houses and blue sky and sea. What are these woods, Eros?

I did not think that I could ever be happy again. I am not happy. But I am not miserable. Now that my heart is quiet again, I am not miserable. Oh! that sick tossing on the black sea, the nausea, the aching, the dulness; that I, who sprang from the waves, could come to hate them so. We will never venture on the sea, again?

Then must we stay for ever here, since this is an island.

[Enter, from the house, Cydippe.]

Is all prepared for us, Cydippe?

I have done my best. The barbarian people are kind and clean. They have blue eyes. There is one, with marigold curls and a crisp beard, who has brought up water and logs of wood. There are two maidens, with hair like a wheat-field and rough red fingers. There are others.... I know not. All seem civil and frightened. But your Majesty will be wretched.

No, Cydippe, I think I shall be happy.

Eros [walking to the parapet, and looking down].

Our white ship still lies there, mother. Shall we start again?

On that leaden water, with the little cruel breakers like coriander seeds? Never. And whither should we go, Eros? We have lost our golden home, our only home. We have lost the old white world of empire; any grey corner of the world of stillness is good enough for us. I will eat, and lie down, and rest without that long, awful heave of the intolerable ocean. Which way, Cydippe?

[Aphrodite and Cydippe enter the house.]

This little milk-white flower, with the drop of wine in it.... It is like the grass that grows on the slopes of Parnassus. It is the only home-like thing here. Can that be grey wool that hangs in the sky, and droops like a curtain over the opposite hills? How cold the air is! Ah! it is raining over in the other island, and the brown fields grow like the yellow fields, melt into a mere white mist behind the slate-coloured sea. Here is one of the barbarians.

[Poseidon slowly appears at the top of the steps.]