Hypatia - or New Foes with an Old Face 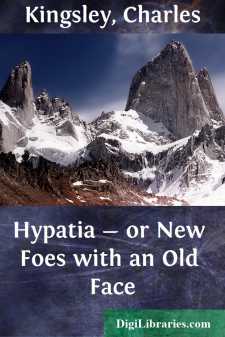 A picture of life in the fifth century must needs contain much which will be painful to any reader, and which the young and innocent will do well to leave altogether unread. It has to represent a very hideous, though a very great, age; one of those critical and cardinal eras in the history of the human race, in which virtues and vices manifest themselves side by side—even, at times, in the same person—with the most startling openness and power. One who writes of such an era labours under a troublesome disadvantage. He dare not tell how evil people were; he will not be believed if he tells how good they were. In the present case that disadvantage is doubled; for while the sins of the Church, however heinous, were still such as admit of being expressed in words, the sins of the heathen world, against which she fought, were utterly indescribable; and the Christian apologist is thus compelled, for the sake of decency, to state the Church's case far more weakly than the facts deserve.

Not, be it ever remembered, that the slightest suspicion of immorality attaches either to the heroine of this book, or to the leading philosophers of her school, for several centuries. Howsoever base and profligate their disciples, or the Manichees, may have been, the great Neo-Platonists were, as Manes himself was, persons of the most rigid and ascetic virtue.

For a time had arrived, in which no teacher who did not put forth the most lofty pretensions to righteousness could expect a hearing. That Divine Word, who is 'The Light who lighteth every man which cometh into the world,' had awakened in the heart of mankind a moral craving never before felt in any strength, except by a few isolated philosophers or prophets. The Spirit had been poured out on all flesh; and from one end of the Empire to the other, from the slave in the mill to the emperor on his throne, all hearts were either hungering and thirsting after righteousness, or learning to do homage to those who did so. And He who excited the craving, was also furnishing that which would satisfy it; and was teaching mankind, by a long and painful education, to distinguish the truth from its innumerable counterfeits, and to find, for the first time in the world's life, a good news not merely for the select few, but for all mankind without respect of rank or race.

For somewhat more than four hundred years, the Roman Empire and the Christian Church, born into the world almost at the same moment, had been developing themselves side by side as two great rival powers, in deadly struggle for the possession of the human race. The weapons of the Empire had been not merely an overwhelming physical force, and a ruthless lust of aggressive conquest: but, even more powerful still, an unequalled genius for organisation, and an uniform system of external law and order. This was generally a real boon to conquered nations, because it substituted a fixed and regular spoliation for the fortuitous and arbitrary miseries of savage warfare: but it arrayed, meanwhile, on the side of the Empire the wealthier citizens of every province, by allowing them their share in the plunder of the labouring masses below them....