Hymns from the Morningland Being Translations, Centos and Suggestions from the Service Books of the Holy Eastern Church 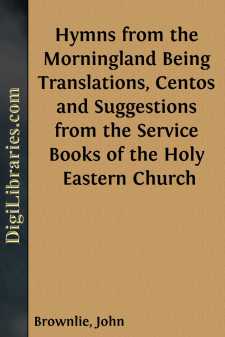 Critics are of three classes:—the laudatory, who, if they see anything to complain of, make no complaint; the severe, who, if they see anything deserving commendation, say nothing about it; and the discriminating, who see both and say it, and at the same time throw out hints which as a rule are both acceptable and helpful. Particularly is this the case when the advice tendered confirms a growing conviction on the part of a writer.

One cannot work continuously at a subject, and all the while get the thoughtful criticism of his observers, without improving his methods. From a review of a recent volume by the writer, the following is taken:—“It seems to us that it is in the adaptation, rather than strict translation, that the wealth of thought and emotion buried in the service books of the Eastern [xii] Church will be minted into coin of golden praise meet for sanctuary use, and comparable in worth and beauty to the splendid currency of these latter days.” This is strictly true, and it is the conviction which has for some time possessed the author, with the result that he has been giving less attention to translation, or transliteration, and more attention to suggestion, adaptation, and reminiscence. One cannot spend a day with the Greek service books (say with the Triodion, which contains the incomparable Lenten and Easter offices) without having his mind filled with thoughts the most beautiful, thoughts which can sometimes be expressed in almost identical phrase with the original, but which oftener, in order to do them justice by revealing them in all their richness, require to be dwelt upon, expanded, and clothed in appropriate western phrase. This is without doubt the best way in which to deal with the praise material of the Greek service books, and the present writer has set himself in this volume to act according to that conviction. Here, there [xiii] are fewer translations than in any former volume, and the greater number of the hymns are reminiscences of the Greek.

The contents of this book may be ranged under three categories:—A few translations or renderings, as literal as it is possible or desirable to make them; centos, or patchwork, i.e., pieces which are not versions of any particular hymn in the original, but which are made up of portions of various hymns; and suggestions, or reminiscences of the Greek. In the case of the last, the best that can be said of them is that they owe their existence in the present instance, to the Greek. While to the ordinary reader there may be nothing in these suggestions to indicate their source, no one who is acquainted with the praise of the Eastern Church will fail to detect here and there certain marks which inevitably announce their origin. In most cases initial Greek headlines have been dispensed with, for the reason that they can serve no useful purpose, nor indicate with any certainty the source of any particular hymn.

When one rises from a contemplation of Christian worship as it is presented to him in the ancient forms of the Apostolic Church, it is with pain that his ears are assailed with charges which he knows to be as lacking in truth as they would be if they were levelled against ourselves....