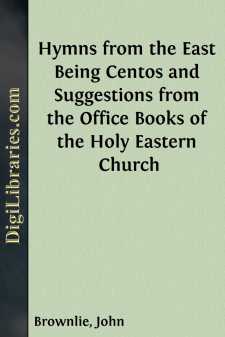 This fourth series of Hymns from the Office Books of The Holy Eastern Church, differs from the preceding three in this, that the hymns are less translations or renderings, and more centos and suggestions.

One cannot continue long to interest himself in any work, and receive from time to time the observations and criticisms of his fellows, without, if he have his eyes and mind open to receive impressions, feeling himself impelled to alter his methods in some particular or other.

In previous volumes the author has been careful to give, for the most part, carefully executed—that is to say, truthfully rendered translations from the originals. Work of that kind is useful, and absolutely necessary for certain purposes; but, unless for the hymnologist, or for the liturgiologist, it is far from being attractive. To be true, [10] renderings can hardly be graceful, and they must lack much of the literary charm which attaches itself to productions which are more untrammelled. Hence, unless, as has been said, to the few who are specialists, translations are not much in favour. They have earned a reputation, and that reputation adheres to them: they are cold and uninspiring. Such is their reputation, not always just, but who can say that it has not, on the whole, been earned?

Perhaps it would be wrong to say that there is any prejudice against translations from the Greek or any other language whatever, as such. The reluctance to welcome translations is really reluctance to welcome poems which do not find their way to the heart. For this reason there is perhaps not more than a score of translations which have won their way from permanent hymnals to a permanent place in the affections of our devout fellow-countrymen. In this connection it is to be noted that we speak of translations, and not of suggestions such as, “Art thou weary,” or “O, happy band of pilgrims,” and many others, which have [11] advanced into great favour, and are termed translations, but are not.

True hymns are sacred lyrics, and a lyric to be lyrical and heart appealing, must be inevitable. It must be the spontaneous expression of the heart of the author—an expression which had to come. It is the latent secret of the power of true hymns, for what must be uttered will assuredly, sooner or later, find its way to some heart. Such jets of living poetry must be awaited: they cannot be forced. But a translator must deliberately sit down at his desk and work—manufacture, if you will—and endeavour to turn on the lathe of graceful culture, elegancies which readers may admire, but will never feel.

Perhaps translators from the Greek have a singular temptation to eschew. Hymns from the Offices have to be created in Greek, as has been pointed out in a former Introduction, before they can be the source of living poetic inspiration. No doubt the necessity of forming a cento is also the privilege, but it may easily entice a translator to be satisfied with a lifeless stringing of inept [12] fragments....