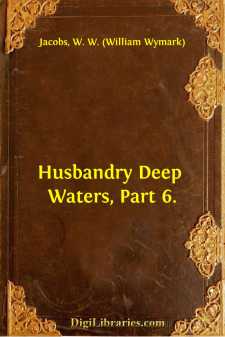 Dealing with a man, said the night-watchman, thoughtfully, is as easy as a teetotaller walking along a nice wide pavement; dealing with a woman is like the same teetotaller, arter four or five whiskies, trying to get up a step that ain't there. If a man can't get 'is own way he eases 'is mind with a little nasty language, and then forgets all about it; if a woman can't get 'er own way she flies into a temper and reminds you of something you oughtn't to ha' done ten years ago. Wot a woman would do whose 'usband had never done anything wrong I can't think.

I remember a young feller telling me about a row he 'ad with 'is wife once. He 'adn't been married long and he talked as if the way she carried on was unusual. Fust of all, he said, she spoke to 'im in a cooing sort o' voice and pulled his moustache, then when he wouldn't give way she worked herself up into a temper and said things about 'is sister. Arter which she went out o' the room and banged the door so hard it blew down a vase off the fireplace. Four times she came back to tell 'im other things she 'ad thought of, and then she got so upset she 'ad to go up to bed and lay down instead of getting his tea. When that didn't do no good she refused her food, and when 'e took her up toast and tea she wouldn't look at it. Said she wanted to die. He got quite uneasy till 'e came 'ome the next night and found the best part of a loaf o' bread, a quarter o' butter, and a couple o' chops he 'ad got in for 'is supper had gorn; and then when he said 'e was glad she 'ad got 'er appetite back she turned round and said that he grudged 'er the food she ate.

And no woman ever owned up as 'ow she was wrong; and the more you try and prove it to 'em the louder they talk about something else. I know wot I'm talking about because a woman made a mistake about me once, and though she was proved to be in the wrong, and it was years ago, my missus shakes her 'ead about it to this day.

It was about eight years arter I 'ad left off going to sea and took up night-watching. A beautiful summer evening it was, and I was sitting by the gate smoking a pipe till it should be time to light up, when I noticed a woman who 'ad just passed turn back and stand staring at me. I've 'ad that sort o' thing before, and I went on smoking and looking straight in front of me. Fat middle-aged woman she was, wot 'ad lost her good looks and found others. She stood there staring and staring, and by and by she tries a little cough.

I got up very slow then, and, arter looking all round at the evening, without seeing 'er, I was just going to step inside and shut the wicket, when she came closer.

I gave her a look that made her catch 'er breath, and I was just stepping through the wicket, when she laid hold of my coat and tried to hold me back.

She pulled out a dirt-coloured pocket-'ankercher and stood there dabbing her eyes with it....