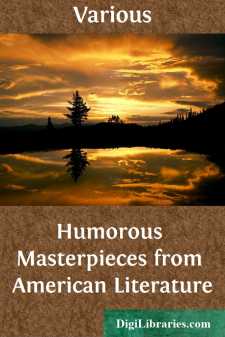 "Bridgeport! Change cars for the Naugatuck Railroad!" shouted the conductor of the New York and Boston Express Train, on the evening of May 27, 1858.... Mr. Johnson, carpet-bag in hand, jumped upon the platform, entered the office, purchased a ticket for Waterbury, and was soon whirling in the Naugatuck train towards his destination.

On reaching Waterbury, in the soft spring twilight, Mr. Johnson walked up and down in front of the station, curiously scanning the faces of the assembled crowd. Presently he noticed a gentleman who was performing the same operation upon the faces of the alighting passengers. Throwing himself directly in the way of the latter, the two exchanged a steady gaze.

Then there was a crushing grasp of hands, repeated after a pause, in testimony of ancient friendship, and Mr. Billings, returning to practical life asked:

"Is that all your baggage? Come, I have a buggy here: Eunice has heard the whistle, and she'll be impatient to welcome you."

The impatience of Eunice (Mrs. Billings, of course) was not of long duration; for in five minutes thereafter she stood at the door of her husband's chocolate-colored villa, receiving his friend....

J. Edward Johnson was a tall, thin gentleman of forty-five.... A year before, some letters, signed "Foster, Kirkup, & Co., per Enos Billings," had accidentally revealed to him the whereabouts of the old friend of his youth with whom we now find him domiciled....

"Enos," said he, as he stretched out his hand for the third cup of tea (which he had taken only for the purpose of prolonging the pleasant table-chat), "I wonder which of us is most changed."

"You, of course," said Mr. Billings, "with your brown face and big moustache. Your own brother wouldn't have known you, if he had seen you last, as I did, with smooth cheeks and hair of unmerciful length. Why, not even your voice is the same!"

"That is easily accounted for," replied Mr. Johnson. "But in your case, Enos, I am puzzled to find where the difference lies. Your features seem to be but little changed, now that I can examine them at leisure; yet it is not the same face. But really, I never looked at you for so long a time, in those days. I beg pardon; you used to be so—so remarkably shy."

Mr. Billings blushed slightly, and seemed at a loss what to answer. His wife, however, burst into a merry laugh, exclaiming:

He, catching the infection, laughed also; in fact, Mr. Johnson laughed, but without knowing why.

"The 'A.C.'!" said Mr. Billings. "Bless me, Eunice! how long it is since we have talked of that summer! I had almost forgotten that there ever was an A.C.... Well, the A.C. culminated in '45. You remember something of the society of Norridgeport, the last winter you were there? Abel Mallory, for instance?"