Humanity's Gain from Unbelief Reprinted from the "North American Review" of March, 1889 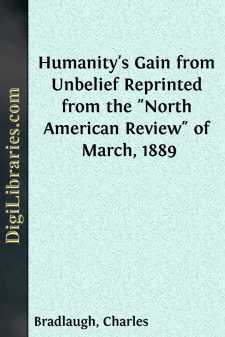 As an unbeliever, I ask leave to plead that humanity has been real gainer from scepticism, and that the gradual and growing rejection of Christianity—like the rejection of the faiths which preceded it—has in fact added, and will add, to man's happiness and well being. I maintain that in physics science is the outcome of scepticism, and that general progress is impossible without scepticism on matters of religion. I mean by religion every form of belief which accepts or asserts the supernatural. I write as a Monist, and use the word "nature" as meaning all phenomena, every phænomenon, all that is necessary for the happening of any and every phænomenon. Every religion is constantly changing, and at any given time is the measure of the civilisation attained by what Guizot described as the juste milieu of those who profess it. Each religion is slowly but certainly modified in its dogma and practice by the gradual development of the peoples amongst whom it is professed. Each discovery destroys in whole or part some theretofore cherished belief. No religion is suddenly rejected by any people; it is rather gradually out-grown. None see a religion die; dead religions are like dead languages and obsolete customs; the decay is long and—like the glacier march—is only perceptible to the careful watcher by comparisons extending over long periods. A superseded religion may often be traced in the festivals, ceremonies, and dogmas of the religion which has replaced it. Traces of obsolete religions may often be found in popular customs, in old wives' stories, and in children's tales.

It is necessary, in order that my plea should be understood, that I should explain what I mean by Christianity; and in the very attempt at this explanation there will, I think, be found strong illustration of the value of unbelief. Christianity in practice may be gathered from its more ancient forms, represented by the Roman Catholic and the Greek Churches, or from the various churches which have grown up in the last few centuries. Each of these churches calls itself Christian. Some of them deny the right of the others to use the word Christian. Some Christian churches treat, or have treated, other Christian churches as heretics or unbelievers. The Roman Catholics and the Protestants in Great Britain and Ireland have in turn been terribly cruel one to the other; and the ferocious laws of the seventeenth and eighteenth centuries, enacted by the English Protestants against English and Irish Papists, are a disgrace to civilisation. These penal laws, enduring longest in Ireland, still bear fruit in much of the political mischief and agrarian crime of to-day. It is only the tolerant indifference of scepticism that, one after the other, has repealed most of the laws directed by the Established Christian Church against Papists and Dissenters, and also against Jews and heretics. Church of England clergymen have in the past gone to great lengths in denouncing nonconformity; and even in the present day an effective sample of such denunciatory bigotry may be found in a sort of orthodox catechism written by the Rev....