Hugo A Fantasia on Modern Themes 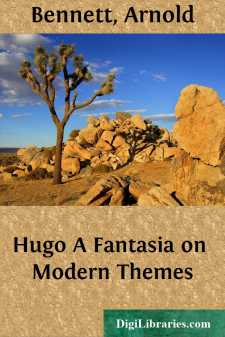 He wakened from a charming dream, in which the hat had played a conspicuous part.

'I shouldn't mind having that hat,' he murmured.

A darkness which no eye could penetrate surrounded him as he lay in bed. Absolute obscurity was essential to the repose of that singular brain, and he had perfected arrangements for supplying the deficiencies of Nature's night.

He touched a switch, and in front of him at a distance of thirty feet the ivory dial of a clock became momentarily visible under the soft yellow of a shaded electric globe. It was fifteen minutes past six. At the same moment a bell sounded the quarter in delicate tones, which fell on the ear as lightly as dew. In the upper gloom could be discerned the contours of a vast dome, decorated in turquoise-blue and gold.

He pressed a button near the switch. A portière rustled, and a young man approached his bed—a short, thin, pale, fair young man, active and deferential.

'My tea, Shawn. Draw the curtains and open the windows.'

In an instant the room was brilliantly revealed as a great circular apartment, magnificently furnished, with twelve windows running round the circumference beneath the dome. The virginal zephyrs of a July morning wandered in. The sun, although fierce, slanted his rays through the six eastern windows, printing a new pattern on the Tripoli carpets. Between the windows were bookcases, full of precious and extraordinary volumes, and over the bookcases hung pictures of the Barbizon school. These books and these pictures were the elegant monument of hobbies which their owner had outlived. His present hobby happened to be music. A Steinway grand-piano was prominent in the chamber, and before the ebony instrument stood a mechanical pianoforte-player.

He paused reflectively, leaning on one elbow, as he made the tea which Simon Shawn had brought and left on the night-table. And again, at the third cup, he repeated to himself that he must possess the hat.

He had a passion for tea. His servants had received the strictest orders to supply him at early morn with materials sufficient only for two cups. Nevertheless, they were always a little generous, and, by cheating himself slightly in the first and the second cup, the votary could often, to his intense joy, conjure a third out of the pot.

After glancing through the newspaper which accompanied the tea, he jumped vivaciously out of bed, veiled the splendour of his pyjamas beneath a quilted toga, and disappeared into a dressing-room, whistling.

'Shawn!' he cried out from his bath, when he heard the rattle of the tea-tray.

'Play me the Chopin Fantasie, will you. I feel like it.'

'Certainly, sir,' said Simon, and paused. 'Which particular one do you desire me to render, sir?'

'There is only one, Shawn, for piano solo.'

The gentle plashing of water mingled with the strains of one of the greatest of all musical compositions, as interpreted by Simon Shawn with the aid of an ingenious contrivance the patentees of which had spent twenty thousand pounds in advertising it....