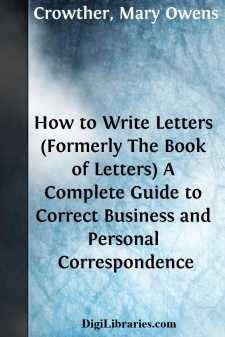 WHAT IS A LETTER?

It is not so long since most personal letters, after an extremely formal salutation, began "I take my pen in hand." We do not see that so much nowadays, but the spirit lingers. Pick up the average letter and you cannot fail to discover that the writer has grimly taken his pen in hand and, filled with one thought, has attacked the paper. That one thought is to get the thing over with.

And perhaps this attitude of getting the thing over with at all costs is not so bad after all. There are those who lament the passing of the ceremonious letter and others who regret that the "literary" letter—the kind of letter that can be published—is no longer with us. But the old letter of ceremony was not really more useful than a powdered wig, and as for the sort of letter that delights the heart and lightens the labor of the biographer—well, that is still being written by the kind of person who can write it. It is better that a letter should be written because the writer has something to say than as a token of culture. Some of the letters of our dead great do too often remind us that they were not forgetful of posterity.

The average writer of a letter might well forget culture and posterity and address himself to the task in hand, which, in other than the most exceptional sort of letter, is to say what he has to say in the shortest possible compass that will serve to convey the thought or the information that he wants to hand on. For a letter is a conveyance of thought; if it becomes a medium of expression it is less a letter than a diary fragment.

Most of our letters in these days relate to business affairs or to social affairs that, as far as personality is concerned, might as well be business. Our average letter has a rather narrow objective and is not designed to be literature. We may, it is true, write to cheer up a sick friend, we may write to tell about what we are doing, we may write that sort of missive which can be classified only as a love letter—but unless such letters come naturally it is better that they be not written. They are the exceptional letters. It is absurd to write them according to rule. In fact, it is absurd to write any letter according to rule. But one can learn the best usage in correspondence, and that is all that this book attempts to present.

The heyday of letter writing was in the eighteenth century in England. George Saintsbury, in his interesting "A Letter Book," says:

"By common consent of all opinion worth attention that century was, in the two European literatures which were equally free from crudity and decadence—French and English—the very palmiest day of the art. Everybody wrote letters, and a surprising number of people wrote letters well. Our own three most famous epistolers of the male sex, Horace Walpole, Gray, and Cowper—belong wholly to it; and 'Lady Mary'—our most famous she-ditto—belongs to it by all but her childhood; as does Chesterfield, whom some not bad judges would put not far if at all below the three men just mentioned. The rise of the novel in this century is hardly more remarkable than the way in which that novel almost wedded itself—certainly joined itself in the most frequent friendship—to the letter-form. But perhaps the excellence of the choicer examples in this time is not really more important than the abundance, variety, and popularity of its letters, whether good, indifferent, or bad....