How to Listen to Music, 7th ed. Hints and Suggestions to Untaught Lovers of the Art 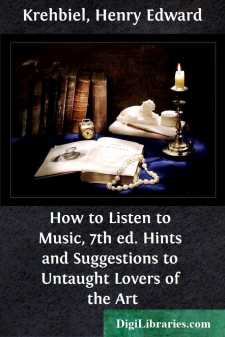 This book has a purpose, which is as simple as it is plain; and an unpretentious scope. It does not aim to edify either the musical professor or the musical scholar. It comes into the presence of the musical student with all becoming modesty. Its business is with those who love music and present themselves for its gracious ministrations in Concert-Room and Opera House, but have not studied it as professors and scholars are supposed to study. It is not for the careless unless they be willing to inquire whether it might not be well to yield the common conception of entertainment in favor of the higher enjoyment which springs from serious contemplation of beautiful things; but if they are willing so to inquire, they shall be accounted the class that the author is most anxious to reach. The reasons which prompted its writing and the laying out of its plan will presently appear. For the frankness of his disclosure the author might be willing to apologize were his reverence for music less and his consideration for popular affectations more; but because he is convinced that a love for music carries with it that which, so it be but awakened, shall speedily grow into an honest desire to know more about the beloved object, he is willing to seem unamiable to the amateur while arguing the need of even so mild a stimulant as his book, and ingenuous, mayhap even childish, to the professional musician while trying to point a way in which better appreciation may be sought.

The capacity properly to listen to music is better proof of musical talent in the listener than skill to play upon an instrument or ability to sing acceptably when unaccompanied by that capacity. It makes more for that gentleness and refinement of emotion, thought, and action which, in the highest sense of the term, it is the province of music to promote. And it is a much rarer accomplishment. I cannot conceive anything more pitiful than the spectacle of men and women perched on a fair observation point exclaiming rapturously at the loveliness of mead and valley, their eyes melting involuntarily in tenderness at the sight of moss-carpeted slopes and rocks and peaceful wood, or dilating in reverent wonder at mountain magnificence, and then learning from their exclamations that, as a matter of fact, they are unable to distinguish between rock and tree, field and forest, earth and sky; between the dark-browns of the storm-scarred rock, the greens of the foliage, and the blues of the sky.

Yet in the realm of another sense, in the contemplation of beauties more ethereal and evanescent than those of nature, such is the experience which in my capacity as a writer for newspapers I have made for many years. A party of people blind to form and color cannot be said to be well equipped for a Swiss journey, though loaded down with alpenstocks and Baedekers; yet the spectacle of such a party on the top of the Rigi is no more pitiful and anomalous than that presented by the majority of the hearers in our concert-rooms....