How to Invest Money 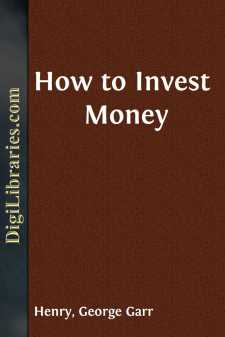 With the immense increase in wealth in the United States during the last decade and its more general distribution, the problem of investment has assumed correspondingly greater importance. As long as the average business man was an habitual borrower of money and possest no private fortune outside of his interest in his business, he was not greatly concerned with investment problems. The surplus wealth of the country for a long time was in the hands of financial institutions and a few wealthy capitalists. These men, the officers and directors of banks, savings-banks, and insurance companies, and the possessors of hereditary wealth, were thoroughly equipped by training and experience for the solving of investment problems and needed no help in the disposition of the funds under their control. During the last ten years, however, these conditions have been greatly altered. The number of business men to-day in possession of funds in excess of their private wants and business requirements is far greater than it was ten years ago, and is constantly increasing. These men are confronted with a real investment problem.

While they have not always recognized it, the problem which they are called upon to solve is really twofold—it concerns the safeguarding of their private fortune and the wise disposition of their business surplus. They have usually seen the first part of this problem, but not all have succeeded in clearly understanding the second. When the treatment of a man's business surplus is spoken of as an investment problem, it is meant, of course, not his working capital, which should be kept in liquid form for immediate needs, but that portion of his surplus which is set aside for emergencies. It is coming to be a recognized principle that every business enterprise of whatever kind or size should establish a reserve fund. It is felt that the possession of a reserve fund puts the business upon a secure foundation, adds to its financial strength and reputation, and greatly increases its credit and borrowing capacity. The recognition of this fact, combined with the ability to set aside a reserve fund, has brought many men to a consideration of the best way in which to dispose of it. It is obviously a waste of income to have the surplus in bank-accounts; more than that, there would be a constant temptation to use it and to confuse it with working capital. Its best disposition is plainly in some safe interest-bearing security, which can be readily sold, so that it will be available for use if necessity demands.

Confronted with the double problem thus outlined, what measure of success has attended the average business man in its solution?

It is safe to say that the average man has found it easier to make money than to take care of it. Money-making, for him, is the result of successful activity in his own line of business, with which he is thoroughly familiar; while the investment of money is a thing apart from his business, with which he is not familiar, and of which he may have had little practical experience....