How to Appreciate Music 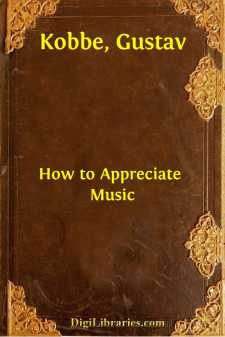 There must be practically on the part of every one who attends a pianoforte recital some degree of curiosity regarding the instrument itself. Therefore, it seems to me pertinent to institute at the very outset an inquiry into what the pianoforte is and how it became what it is—the most practical, most expressive and most universal of musical instruments, the instrument of the concert hall and of the intimate home circle. Knowledge of such things surely will enhance the enjoyment of a pianoforte recital—should be, in fact, a prerequisite to it.

The pianoforte is the most used and, for that very reason, perhaps, the most abused of musical instruments. Even its real name generally is denied it. Most people call it a piano, although piano is a musical term denoting a degree of sound, soft, gentle, low—the opposite of forte, which means strong and loud. The combination of the two terms in one word, pianoforte, signifies that the instrument is capable of being played both softly and loudly—both piano and forte. It was this capacity that distinguished it from its immediate precursors, the old-time harpsichords and clavichords. One of the first requirements in learning how to understand music is to learn to call things musical by their right names. To speak of a pianoforte as a piano is one of our unjustifiable modern shortcuts of speech, a characteristic specimen of linguistic laziness and evidence of utter ignorance concerning the origin and character of the instrument.

If I were asked to express in a single phrase the importance of this instrument in the musical life of to-day I would say that the pianoforte is the orchestra of the home. Indeed, the title of the familiar song “What Is Home Without a Mother?” might, without any undue stretch of imagination, be changed to “What Is Home Without a Pianoforte?”—although, if you are working hard at your music and practicing scales and finger exercises several hours a day, it might be wiser not to ask your neighbor’s opinion on this point.

The King of Instruments.

“In households where there is no pianoforte we seem to breathe a foreign atmosphere,” says Oscar Bie, in his history of the instrument and its players; and he adds with perfect truth that it has become an essential part of our life, giving its form to our whole musical culture and stamping its characteristics upon our whole conception of music. Surely out of every ten musical persons, layman or professional, at least nine almost invariably have received their first introduction to music through the pianoforte and have derived the greater part of their musical knowledge from it. Even composers like Wagner and Meyerbeer, whose work is wholly associated with opera, had their first lessons in music on the pianoforte, and Meyerbeer achieved brilliant triumphs as a concert pianist before he turned his attention to the operatic stage.

Of all musical instruments the pianoforte is the most intimate and at the same time the most public—“the favorite of the lonely mourner and of the solitary soul whose joy seeks expression” and the tie that unites the circle of family and friends....