How the Piano Came to Be 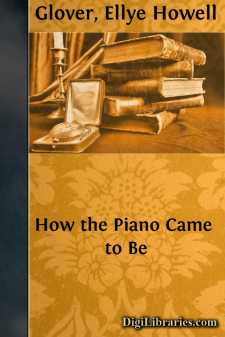 How the PianoCame To Be

From the dried sinews stretched across the shell of a dead tortoise to the concert-grand piano of the present day is a far flight. Yet to this primitive source, it is said, may be traced the evolution of the stringed instrument which reached its culmination in the piano. The latter has been aptly called "the household orchestra," and in tracing its origin one must go far back into the annals of the past. If we accept the Bible as history, and it is the greatest of all histories, the stringed instrument is of very ancient date. It is recorded that the ambassadors who came to the court of Saul played upon their nebels, and that David, the sweet singer of Israel, wooed the king from his sadness by singing to his harp. We must go back to the civilization of ancient Egypt, more than five hundred years before that morning nearly two thousand years ago when, it is written, the angelic choir chanted above the historic manger the glorious message, "Peace on earth, good will to men," and the morning stars sang together.

In the olden times the Greeks laid claim to everything which bespoke culture and progress. The pages of ancient history record no other one thing so persistently as "the glory that was Greece." And so they tell of the time when—

"Music, heavenly maid, was young,And yet in ancient Greece she sung!"

It is now generally conceded, however, that it was not in Greece but in ancient Egypt that art, music, and the sciences in general were born. That the Egyptians had stringed instruments is unquestionable. Away back in the year 525 B.C. Cambyses subdued the land. He overthrew the temples in the ruins of which have been found the records of musical instruments dating from the very earliest times. But the priests who guarded the temples were slain, and every vestige of what might have helped to determine the origin of the stringed instrument, out of which, later, the piano was evolved, as well as the names of those who wrought and endeavored to construct instruments which would give forth music, was forever lost.

For lack of written authority, then, one must turn back to tradition for light upon the origin of the piano. Tradition says that Ham, or one of his sons, led the first colony into Egypt. In fact there is a legend that Noah himself once dwelt there and some historians have identified him with the great deity of the Egyptians, Osiris. To Hermes, or Mercury, the secretary of Osiris, is ascribed the invention of the first stringed instrument. The story is that Hermes was walking one day along the banks of the Nile. It was just after one of the great inundations. The Nile had overflowed its banks and the land had been submerged. But now the water had subsided, and as Hermes walked along the shore, his foot struck accidentally against the shell of a dead tortoise. Across the inside of the shell the dried sinews were tightly stretched. Hermes picked it up and touched the sinews with his fingers....