How Spring Came in New England 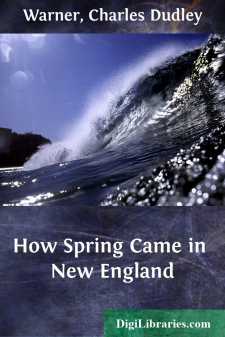 New England is the battle-ground of the seasons. It is La Vendee. To conquer it is only to begin the fight. When it is completely subdued, what kind of weather have you? None whatever.

What is this New England? A country? No: a camp. It is alternately invaded by the hyperborean legions and by the wilting sirens of the tropics. Icicles hang always on its northern heights; its seacoasts are fringed with mosquitoes. There is for a third of the year a contest between the icy air of the pole and the warm wind of the gulf. The result of this is a compromise: the compromise is called Thaw. It is the normal condition in New England. The New-Englander is a person who is always just about to be warm and comfortable. This is the stuff of which heroes and martyrs are made. A person thoroughly heated or frozen is good for nothing. Look at the Bongos. Examine (on the map) the Dog-Rib nation. The New-Englander, by incessant activity, hopes to get warm. Edwards made his theology. Thank God, New England is not in Paris!

Hudson's Bay, Labrador, Grinnell's Land, a whole zone of ice and walruses, make it unpleasant for New England. This icy cover, like the lid of a pot, is always suspended over it: when it shuts down, that is winter. This would be intolerable, were it not for the Gulf Stream. The Gulf Stream is a benign, liquid force, flowing from under the ribs of the equator,—a white knight of the South going up to battle the giant of the North. The two meet in New England, and have it out there.

This is the theory; but, in fact, the Gulf Stream is mostly a delusion as to New England. For Ireland it is quite another thing. Potatoes ripen in Ireland before they are planted in New England. That is the reason the Irish emigrate—they desire two crops the same year. The Gulf Stream gets shunted off from New England by the formation of the coast below: besides, it is too shallow to be of any service. Icebergs float down against its surface-current, and fill all the New-England air with the chill of death till June: after that the fogs drift down from Newfoundland. There never was such a mockery as this Gulf Stream. It is like the English influence on France, on Europe. Pitt was an iceberg.

Still New England survives. To what purpose? I say, as an example: the politician says, to produce "Poor Boys." Bah! The poor boy is an anachronism in civilization. He is no longer poor, and he is not a boy. In Tartary they would hang him for sucking all the asses' milk that belongs to the children: in New England he has all the cream from the Public Cow. What can you expect in a country where one knows not today what the weather will be tomorrow? Climate makes the man. Suppose he, too, dwells on the Channel Islands, where he has all climates, and is superior to all. Perhaps he will become the prophet, the seer, of his age, as he is its Poet. The New-Englander is the man without a climate. Why is his country recognized? You won't find it on any map of Paris.

And yet Paris is the universe. Strange anomaly! The greater must include the less; but how if the less leaks out? This sometimes happens.

And yet there are phenomena in that country worth observing. One of them is the conduct of Nature from the 1st of March to the 1st of June, or, as some say, from the vernal equinox to the summer solstice....