How Private George W. Peck Put Down The Rebellion or, The Funny Experiences of a Raw Recruit - 1887 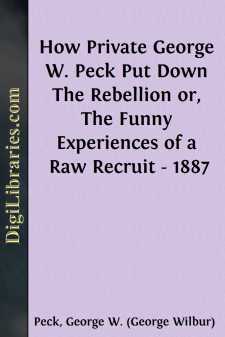 CHAPTER I. The War Literature of the "Century" is very Confusing—I amResolved to tell the True Story of the War—How and "Why IBecame a Raw Recruit—My Quarters—My Horse—My First Ride.

For the last year or more I have been reading the articles in the Century magazine, written by generals and things who served on both the Union and Confederate sides, and have been struck by the number of "decisive battles" that were fought, and the great number of generals who fought them and saved the country. It seems that each general on the Union side, who fought a battle, and writes an article for the aforesaid magazine, admits that his battle was the one which did the business. On the Confederate side, the generals who write articles invariably demonstrate that they everlastingly whipped their opponents, and drove them on in disorder. To read those articles it seems strange that the Union generals who won so many decisive battles, should not have ended the war much sooner than they did, and to read the accounts of battles won by the Confederates, and the demoralization that ensued in the ranks of their opponents, it seems marvellous that the Union army was victorious. Any man who has followed these generals of both sides, in the pages of that magazine, must conclude that the war was a draw game, and that both sides were whipped. Thus far no general has lost a battle on either side, and all of them tacitly admit that the whole thing depended on them, and that other commanders were mere ciphers. This is a kind of history that is going to mix up generations yet unborn in the most hopeless manner.

It has seemed to me as though the people of this country had got so mixed up about the matter that it was the duty of some private soldier to write a description of the decisive battle of the war, and as I was the private soldier who fought that battle on the Union side, against fearful odds, viz: against a Confederate soldier who was braver than I was, a better horseback rider, and a better poker player, I feel it my duty to tell about it. I have already mentioned it to a few veterans, and they have advised me to write an article for the Century, but I have felt a delicacy about entering the lists, a plain, unvarnished private soldier, against those generals. While I am something of a liar myself, and can do fairly well in my own class, I should feel that in the Century I was entered in too fast a class of liars, and the result would be that I should not only lose my entrance fee, but be distanced. So I have decided to contribute this piece of history solely for the benefit of the readers of my own paper, as they will believe me.

It was in 1864 that I joined a cavalry regiment in the department of the Gulf, a raw recruit in a veteran regiment. It may be asked why I waited so long before enlisting, and why I enlisted at all, when the war was so near over. I know that the most of the soldiers enlisted from patriotic motives, and because they wanted to help shed blood, and wind up the war....