How It All Came Round 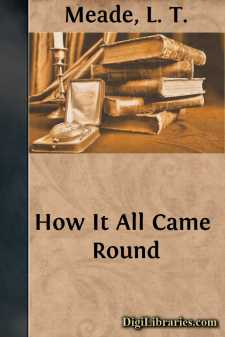 CHAPTER I. THE RICH CHARLOTTE.

The room had three occupants, two were men, the third a woman. The men were middle-aged and gray-haired, the woman on the contrary was in the prime of youth; she was finely made, and well proportioned. Her face was perhaps rather too pale, but the eyes and brow were noble, and the sensitive mouth showed indications of heart as well as intellect.

The girl, or rather young woman, for she was past five and twenty, sat by the fire, a book on her knee. The two men had drawn chairs close to a table. The elder of these men bore such an unmistakable likeness to the girl, that even the most casual observer must have guessed the relationship which existed between them. He was a handsome man, handsomer even than his daughter, but the same individualities marked both faces. While, however, in the woman all was a profound serenity and calm, the man had some anxious lines round the mouth, and some expression, now coming, now going, in the fine gray eyes, which betokened a long-felt anxiety.

The other and younger man was shrewd-looking and commonplace; but a very close observer of human nature might have said, "He may be commonplace, but do not feel too certain; he simply possesses one of those faces which express nothing, from which not the cleverest detective in Scotland Yard could extract any secret."

He was a man with plenty to say, and much humor, and at the moment this story opens he was laughing merrily and in a heart-whole way, and his older and graver companion listened with evident enjoyment.

The room in which the three sat bore evidence of wealth. It was a library, and handsome books lay on the tables, and rare old folios could have been found by those who cared to look within the carefully locked bookcases. Some manuscripts were scattered about, and by the girl's side, on a small table, lay several carefully revised proofs, and even now she was bending earnestly over a book of reference.

"Well, Jasper," said the elder man, when the younger paused for an instant in his eager flow of words, "we have talked long enough about that fine land you have just come from, for even Australian adventures can keep—I am interested in something nearer home. What do you say to Charlotte there? She was but a baby when you saw her last."

"She was five years old," replied Jasper. "A saucy little imp, bless you! just the kind that would be sure to grow into a fine woman. But to tell the truth I don't much care to look at her, for she makes me feel uncommonly old and shaky."

"You gave me twenty years to grow into a woman, uncle," answered the pleasant voice of Charlotte Harman. "I could not choose but make good use of the time."

"But not for a long, long time, Lottie my pet," interrupted the father. "You need not mind your uncle Jasper. These little speeches were always his way. And I'll tell you something else, Jasper; that girl of mine has a head worth owning on her shoulders, a head she knows how to use. You will not believe me when I say that she writes in this magazine and this, and she is getting a book ready for the press; ay, and there's another thing. Shall I tell it, Charlotte?"

"Yes, father; it is no secret," replied Charlotte.

"It is this, brother Jasper; you have come home in time for a wedding. My girl is going to leave me. I shall miss her, for she is womanly in the best sense of the word, and she is my only one; but there is a comfort—the man she is to marry is worthy of her."

"And there is another comfort, father," said Charlotte; "that though I hope to be married, yet I never mean to leave you. You know that well, I have often told you so," and here this grave young girl came over and kissed her father's forehead.

He smiled back at her, all the care leaving his eyes as he did so. Uncle Jasper had sprung impatiently to his feet.

"As to the lass being married," he said, "that's nothing; all women marry, or if they don't they ought to. But what was that you said, John, about writing, writing in a printed book? You were joking surely, man?"

"No, I was not," answered the father. "Go and show your uncle Jasper that last article of yours, Charlotte."