How I write my novels 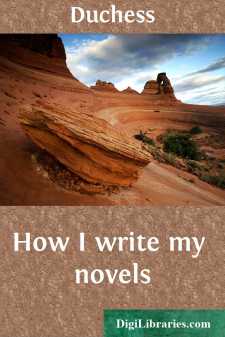 To sit down in cold blood and deliberately set to cudgel one's brains with a view to dragging from them a plot wherewith to make a book is (I have been told) the habit of some writers, and those of no small reputation. Happy people! What powers of concentration must be theirs! What a belief in themselves—that most desirable of all beliefs, that sweet propeller toward the temple of fame. Have faith in yourself, and all me, will have faith in you.

But as for me, I have to lie awake o'nights longing and hoping for inspirations that oft-times are slow to come. But when they do come, what a delight! All at once, in a flash, as it were, the whole story lies open before me—a delicate diorama, vague here and there, but with a beginning and an end—clear as crystal. I can never tell when these inspirations may be coming; sometimes in the dark watches of the night; sometimes when driving through the crisp, sweet air; sometimes a word in a crowded drawing-room, a thought rising from the book in hand, sends them with a rush to the surface, where they are seized and brought to land, and carried home in triumph. After that the 'dressing' of them is simple enough.

But just in the beginning it was not so simple. Alas! for that first story of mine—the raven I sent you of my ark and never saw again. Unlike the proverbial curse, it did not come home to roost; it stayed where I had sent it. The only thing I ever heard of it again was a polite letter from the editor in whose office it lay, telling me I could have it back if I enclosed stamps to the amount of twopence halfpenny, otherwise he should feel it his unpleasant duty to 'consign it to the waste-paper basket'. I was only sixteen then, and it is a very long time ago; but I have always hated the words 'waste paper' ever since. I don't remember that I was either angry or indignant, but I do remember that I was both sad and sorry. At all events, I never sent that miserable twopence halfpenny, so I conclude my first manuscript went to light the fire of that heartless editor.

So much comfort I may have bestowed on him, but he left me comfortless; and yet who can say what good he may not have done me? Paths made too smooth leave the feet unprepared for rougher roads. To step always in the primrose way is death to the higher desires. Yet oh, for the hours I spent over that poor rejected story, beautifying it (as I fondly, if erroneously, believed), adding a word here, a sentiment there! So conscientiously minded was I, that even the headings of the chapters were scraps of poetry (so called) done all by myself. Well, never mind. I was very young then, and, as they say upon the stage, I 'meant well'.

For a long twelvemonth after that I never dreamed of putting pen to paper. I had given myself up, as it were. I was the most modest of children, and fully decided within myself that a man so clever as a real live editor must needs be could not have been mistaken. He had seen and judged, and practically told me that writing was not my forte.

Yet the inevitable hour came round once more. Once again an idea caught me, held me, persuaded me that I could put it into words. I struggled with it this time, but it was too strong for me; and that early exhilarating certainty that there was 'something in me', as people say, was once more mine, and seizing my pen, I sat down and wrote, wrote, wrote, until the idea was an object formed.

With closed doors I wrote at stolen moments....