How Britannia Came to Rule the Waves Updated to 1900 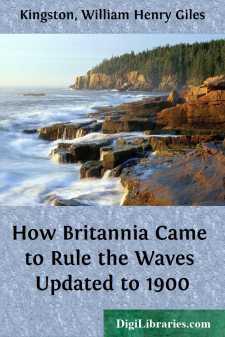 Rome was not built in a day, nor has the glorious British Navy attained its present condition except by slow degrees, by numerous trials and experiments, by improvements gradually and cautiously introduced, and by the employment of a vast amount of thought, energy, and toil. We are apt to forget when we see an elaborate machine, the immense quantity of mental and physical exertion it represents, the efforts of the united minds perhaps of many successive generations, and the labour of thousands of workmen. I propose briefly to trace the progress which the British Navy has made from age to age, as well as its customs, and the habits of its seamen, with their more notable exploits since the days when this tight little island of ours first became known to the rest of the world.

Some writers, indulging in the Darwinian theory of development, would make us believe that the ironclad of the present day is the legitimate offspring of the ancient coracle or wicker-work boat which is still to be found afloat on the waters of the Wye, and on some of the rivers of the east coast; but if such is the case, the descent must be one of many ages, for it is probable that the Britons had stout ships long before the legions of Cassar set their feet upon our shores. I am inclined to agree with an ancient writer who gives it as his opinion that the British were always a naval people. “For,” says he, in somewhat quaint phraseology, “as Britain was an island, the inhabitants could only have come to it across the ocean in ships, and they could scarcely have had ships unless they were nautically inclined.” The same writer asserts that the Britons had vessels of large size long before the invasion of the Romans, but that they either burnt them to prevent their falling into the hands of the invaders, or that they were destroyed by the Romans themselves, who then, adding insult to injury, stigmatised the people as mere painted barbarians, whose sole mode of moving over the waters of their coasts and rivers was in wicker baskets covered with hides—the truth being, that these wicker-ribbed boats were simply the craft used by the British fishermen on their coasts or streams. How could the hordes that in successive ages crossed the German Ocean have performed the voyage unless they had possessed more efficient means of conveyance than these afforded? I must, therefore, agree with the aforesaid ancient writer that they had stout ships, impelled by sails and oars, which were afterwards employed either in commercial or piratical enterprises. The Britons of the southern shores of the island possessed, he says, wooden-built ships of a size considerably greater than any hide-covered barks could have been. It is very certain that many hundred years before the Christian era the Phoenicians visited the coasts of Cornwall and Devonshire, and planted colonies there, which retain to the present day their ancient peculiarities and customs, and even many names of common things. It is probable that these colonists, well acquainted as they were with nautical affairs, kept up their practical knowledge of shipbuilding, and formed a mercantile navy to carry on their commerce with other countries, as well as ships fitted for warfare to protect their ports from foreign invasion, or from the attacks of pirates....