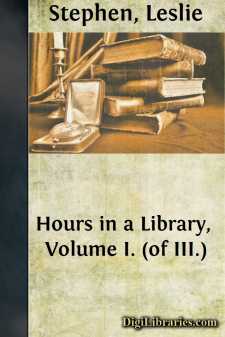 Libraries are as the shrines where all the relics of the ancient saints, full of true virtue, and that without delusion or imposture, are preserved and reposed.—Bacon, Advancement of Learning.

We visit at the shrine, drink in some measure of the inspiration, and cannot easily breathe in other air less pure, accustomed to immortal fruits.—Hazlitt's Plain Speaker.

What a place to be in is an old library! It seems as though all the souls of all the writers that have bequeathed their labours to the Bodleian were reposing here as in some dormitory or middle state. I seem to inhale learning, walking amid their foliage; and the odour of their old moth-scented coverings is fragrant as the first bloom of the sciential apples which grew around the happy orchard.—Charles Lamb, Oxford in the Long Vacation.

My neighbours think me often alone, and yet at such times I am in company with more than five hundred mutes, each of whom communicates his ideas to me by dumb signs quite as intelligibly as any person living can do by uttering of words; and with a motion of my hand I can bring them as near to me as I please; I handle them as I like; they never complain of ill-usage; and when dismissed from my presence, though ever so abruptly, take no offence.—Sterne, Letters.

In a library we are surrounded by many hundreds of dear friends imprisoned by an enchanter in paper and leathern boxes,—Emerson, Books, Society, and Solitude.

Nothing is pleasanter than exploring in a library.—Landor, Pericles and Aspasia.

I never come into a library (saith Heinsius) but I bolt the door to me, excluding lust, ambition, avarice, and all such vices whose nurse is idleness, the mother of ignorance and melancholy herself; and in the very lap of eternity, among so many divine souls, I take my seat with so lofty a spirit and sweet content that I pity all our great ones and rich men that know not their happiness.—Burton, Anatomy of Melancholy.

I do not know that I am happiest when alone; but this I am sure of, that I am never long even in the society of her I love without a yearning for the company of my lamp and my utterly confused and tumbled-over library.—Byron, Moore's Life.

Montesquieu used to say that he had never known a pain or a distress which he could not soothe by half an hour of a good book.—John Morley, On Popular Culture.

There is no truer word than that of Solomon: 'There is no end of making books'; the sight of a great library verifies it; there is no end—indeed, it were pity there should be.—Bishop Hall.

You that are genuine Athenians, devour with a golden Epicurism the arts and sciences, the spirits and extractions of authors.—Culverwell, Light of Nature.

He hath never fed of the dainties that are bred in a book; he hath not eat paper, as it were; he hath not drunk ink; his intellect is not replenished; he is only an animal, only sensible in the duller parts.—Shakespeare, Love's Labour's Lost.

I have wondered at the patience of the antediluvians; their libraries were insufficiently furnished; how then could seven or eight hundred years of life be supportable?—Cowper, Life and Letters by Southey....