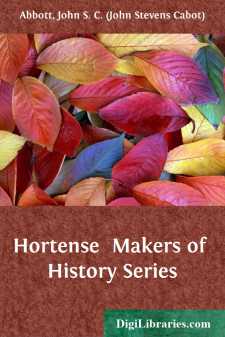 In the year 1776 a very beautiful young lady, by the name of Josephine Rose Tascher, was crossing the Atlantic Ocean from the island of Martinique to France. She was but fifteen years of age; and, having been left an orphan in infancy, had been tenderly reared by an uncle and aunt, who were wealthy, being proprietors of one of the finest plantations upon the island. Josephine was accompanied upon the voyage by her uncle. She was the betrothed of a young French nobleman by the name of Viscount Alexander de Beauharnais, who had recently visited Martinique, and who owned several large estates adjoining the property which Josephine would probably inherit.

It was with great reluctance that Josephine yielded to the importunities of her friends and accepted the proffered hand of the viscount. Her affections had long been fixed upon a play-mate of her childhood by the name of William, and her love was passionately returned. William was then absent in France, pursuing his education. De Beauharnais was what would usually be called a very splendid man. He was of high rank, young, rich, intelligent, and fascinating in his manners. The marriage of Josephine with the viscount would unite the properties. Her friends, in their desire to accomplish the union, cruelly deceived Josephine. They intercepted the letters of William, and withheld her letters to him, and represented to her that William, amidst the gayeties of Paris, had proved a false lover, and had entirely forgotten her. De Beauharnais, attracted by the grace and beauty of Josephine, had ardently offered her his hand. Under these circumstances the inexperienced maiden had consented to the union, and was now crossing the Atlantic with her uncle for the consummation of the nuptials in France.

Upon her arrival she was conducted to Fontainebleau, where De Beauharnais hastened to meet her. Proud of her attractions, he took great pleasure in introducing her to his high-born friends, and lavished upon her every attention. Josephine was grateful, but sad, for her heart still yearned for William. Soon William, hearing of her arrival, and not knowing of her engagement, anxiously repaired to Fontainebleau. The interview was agonizing. William still loved her with the utmost devotion. They both found that they had been the victims of a conspiracy, though one of which De Beauharnais had no knowledge.

Josephine, young, inexperienced, far from home, and surrounded by the wealthy and powerful friends of her betrothed, had gone too far in the arrangements for the marriage to recede. Her anguish, however, was so great that she was thrown into a violent fever. She had no friend to whom she could confide her emotions. But in most affecting tones she entreated that her marriage might be delayed for a few months until she should regain her health. Her friends consented, and she took refuge for a time in the Convent of Panthemont, under the tender care of the sisters....