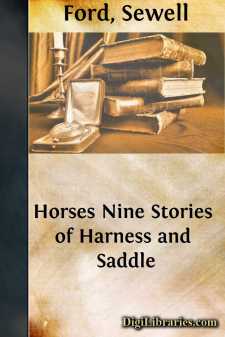 SKIPPER BEING THE BIOGRAPHY OF A BLUE-RIBBONER

At the age of six Skipper went on the force. Clean of limb and sound of wind he was, with not a blemish from the tip of his black tail to the end of his crinkly forelock. He had been broken to saddle by a Green Mountain boy who knew more of horse nature than of the trashy things writ in books. He gave Skipper kind words and an occasional friendly pat on the flank. So Skipper's disposition was sweet and his nature a trusting one.

This is why Skipper learned so soon the ways of the city. The first time he saw one of those little wheeled houses, all windows and full of people, come rushing down the street with a fearful whirr and clank of bell, he wanted to bolt. But the man on his back spoke in an easy, calm voice, saying, "So-o-o! There, me b'y. Aisy wid ye. So-o-o!" which was excellent advice, for the queer contrivance whizzed by and did him no harm. In a week he could watch one without even pricking up his ears.

It was strange work Skipper had been brought to the city to do. As a colt he had seen horses dragging ploughs, pulling big loads of hay, and hitched to many kinds of vehicles. He himself had drawn a light buggy and thought it good fun, though you did have to keep your heels down and trot instead of canter. He had liked best to lope off with the boy on his back, down to the Corners, where the store was.

But here there were no ploughs, nor hay-carts, nor mowing-machines. There were many heavy wagons, it was true, but these were all drawn by stocky Percherons and big Western grays or stout Canada blacks who seemed fully equal to the task.

Also there were carriages—my, what shiny carriages! And what smart, sleek-looking horses drew them! And how high they did hold their heads and how they did throw their feet about—just as if they were dancing on eggs.

It was clear that none of this work was for him. Early on the first morning of his service men in brass-buttoned blue coats came to the stable to feed and rub down the horses. Skipper's man had two names. One was Officer Martin; at least that was the one to which he answered when the man with the cap called the roll before they rode out for duty. The other name was "Reddy." That was what the rest of the men in blue coats called him. Skipper noticed that he had red hair and concluded that "Reddy" must be his real name.

As for Skipper's name, it was written on the tag tied to the halter which he wore when he came to the city. Skipper heard him read it. The boy on the farm had done that, and Skipper was glad, for he liked the name.

There was much to learn in those first few weeks, and Skipper learned it quickly. He came to know that at inspection, which began the day, you must stand with your nose just on a line with that of the horse on either side. If you didn't you felt the bit or the spurs. He mastered the meaning of "right dress," "left dress," "forward," "fours right," and a lot of other things. Some of them were very strange.