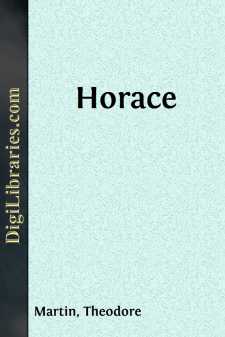 CHAPTER I. BIRTH.—EDUCATION.—CAMPAIGN WITH BRUTUS AND CASSIUS.

Like the two greatest lyrists of modern times, Burns and Béranger, Horace sprang from the ranks of the people. His father had been a slave, and he was himself cradled among "the huts where poor men lie." Like these great lyrists, too, Horace was proud of his origin. After he had become the intimate associate of the first men in Rome—nay, the bosom friend of the generals and statesmen who ruled the world—he was at pains on more occasions than one to call attention to the fact of his humble birth, and to let it be known that, had he to begin life anew, he was so far from desiring a better ancestry that he would, like Andrew Marvell, have made "his destiny his choice." Nor is this done with the pretentious affectation of the parvenu, eager to bring under notice the contrast between what he is and what he has been, and to insinuate his personal deserts, while pretending to disclaim them. Horace has no such false humility. He was proud, and he makes no secret that he was so, of the name he had made,—proud of it for himself and for the class from which, he had sprung. But it was his practice, as well as his settled creed, to rate at little the accidents of birth and fortune. A stronger and higher feeling, however, more probably dictated the avowal,—gratitude to that slave- born father whose character and careful training had stamped an abiding influence upon the life and genius of his son. Neither might he have been unwilling in this way quietly to protest against the worship of rank and wealth which he saw everywhere around him, and which was demoralising society in Rome. The favourite of the Emperor, the companion of Maecenas, did not himself forget, neither would he let others forget, that he was a freedman's son; and in his own way was glad to declare, as Béranger did of himself at the height of his fame,

The Roman poets of the pre-Augustan and Augustan periods, unlike Horace, were all well born. Catullus and Calvus, his great predecessors in lyric poetry, were men of old and noble family Virgil, born five years before Horace, was the son of a Roman citizen of good property. Tibullus, Propertius, and Ovid, who were respectively six, fourteen, and twenty years his juniors, were all of equestrian rank. Horace's father was a freed-man of the town of Venusia, the modern Venosa. It is supposed that he had been a publicus servus, or slave of the community, and took his distinctive name from the Horatian tribe, to which the community belonged. He had saved a moderate competency in the vocation of coactor, a name applied both to the collectors of public revenue and of money at sales by public auction. To which of these classes he belonged is uncertain— most probably to the latter; and in those days of frequent confiscations, when property was constantly changing hands, the profits of his calling, at best a poor one, may have been unusually large. With the fruits of his industry he had purchased a small farm near Venusia, upon the banks of the Aufidus, the modern Ofanto, on the confines of Lucania and Apulia, Here, on the 8th of December, B.C....