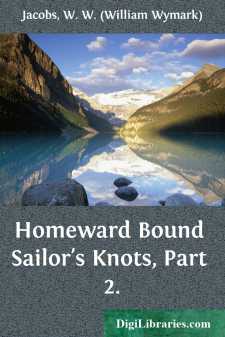 Mr. Hatchard's conversation for nearly a week had been confined to fault- finding and grunts, a system of treatment designed to wean Mrs. Hatchard from her besetting sin of extravagance. On other occasions the treatment had, for short periods, proved successful, but it was quite evident that his wife's constitution was becoming inured to this physic and required a change of treatment. The evidence stared at him from the mantelpiece in the shape of a pair of huge pink vases, which had certainly not been there when he left in the morning. He looked at them and breathed heavily.

"Pretty, ain't they?" said his wife, nodding at them.

"Who gave 'em to you?" inquired Mr. Hatchard, sternly.

His wife shook her head. "You don't get vases like that given to you," she said, slowly. "Leastways, I don't."

"Do you mean to say you bought 'em?" demanded her husband.

"After all I said to you about wasting my money?" persisted Mr. Hatchard, in amazed accents.

"I bought 'em with my own money," said his wife, tossing her head.

"Your money?" said Mr. Hatchard. "To hear you talk anybody 'ud think you'd got three hundred a year, instead o' thirty. Your money ought to be spent in useful things, same as what mine is. Why should I spend my money keeping you, while you waste yours on pink vases and having friends in to tea?"

"Keeping me?" she said, sharply. "You'd better stop before you say anything you might be sorry for, Alfred."

"I should have to talk a long time before I said that," retorted the other.

"I've reasoned with you," continued Mr. Hatchard, "I've argued with you, and I've pointed out the error of your ways to you, and it's all no good."

"Oh, be quiet, and don't talk nonsense," said his wife.

"Talking," continued Mr. Hatchard, "as I said before, is no good. Deeds, not words, is what is wanted."

He rose suddenly from his chair and, taking one of the vases from the mantelpiece, dashed it to pieces on the fender. Example is contagious, and two seconds later he was in his chair again, softly feeling a rapidly growing bump on his head, and gazing goggle-eyed at his wife.

"And I'd do it again," said that lady, breathlessly, "if there was another vase."

Mr. Hatchard opened his mouth, but speech failed him. He got up and left the room without a word, and, making his way to the scullery, turned on the tap and held his head beneath it. A sharp intake of the breath announced that a tributary stream was looking for the bump down the neck of his shirt.

He was away a long time—so long that the half-penitent Mrs. Hatchard was beginning to think of giving first aid to the wounded. Then she heard him coming slowly back along the passage. He entered the room, drying his wet hair on a hand-kerchief....