Hollyhock A Spirit of Mischief 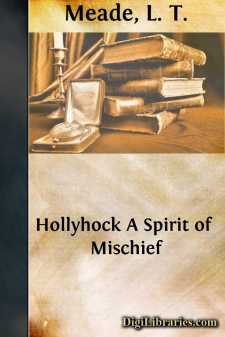 THE CHILDREN OF THE UPPER GLEN.

There was, of course, the Lower Glen, which consisted of boggy places and endless mists in winter, and a small uninteresting village, where the barest necessaries of life could be bought, and where the folks were all of the humbler class, well-meaning, hard-working, but, alas! poor of the poor. When all was said and done, the Lower Glen was a poor place, meant for poor people.

Very different was the Upper Glen. It was beyond doubt a most beautiful region, and as Edinburgh and Glasgow were only some fifty miles away, in these days of motor-cars it was easy to drive there for the good things of life. The Glen was sheltered from the worst storms by vast mountains, and was in itself both broad and flat, with a great inrush of fresh air, a mighty river, and three lakes of various sizes. So beautiful was it, so delightful were its soft and yet at times keen breezes, that it might have been called 'The Home of Health.' But no one thought of giving the Glen this title, for the simple reason that no one thought of health in the Glen; every one was enjoying that blessed privilege to the utmost.

At the time when this story opens, two families lived in the Upper Glen. There was a widowed lady, Mrs Constable, who resided at a lovely home called The Paddock; and there was her brother, a widower, who lived in a house equally beautiful, named The Garden.

The Hon. George Lennox had five young daughters, whom he called not by their baptismal names, but by flower names. Mrs Constable, again, called her five boys after precious stones.

The names of the girls were Jasmine, otherwise Lucy; Gentian, otherwise Margaret; Hollyhock, whose baptismal name was Jacqueline; Rose of the Garden, who was really Rose; and Delphinium, whose real name was Dorothy.

These happy children scarcely ever heard their baptismal names. The flower names and the precious stones names clung to them until the day when pretty Jasmine and manly Jasper were fifteen years of age. On that day there came a very great change in the lives of the Flower Girls and the Precious Stones. On that very day their real story began. They little guessed it, for few of us do believe in sudden changes in a very peaceful—perhaps too peaceful—life.

Nevertheless, a very great change was at hand, and the news which heralded that tremendous change reached them on the evening of the birthday of Jasmine and Jasper. It was the custom of these two most united families to spend their evenings together—one evening at The Garden, the Flower Girls' home, and the next at The Paddock, Mrs Constable's house. On this special occasion the Flower Girls went with their father to The Paddock, and thus avoided receiving until late in the evening the all-important letter which was to alter their lives completely.

George Lennox, whose dead wife had been a Cameron—a near relative of the head of the great house of Ardshiel—bade his sister a most affectionate good-night, and returned to The Garden with his five bonnie lassies....