History of Woman Suffrage, Volume I

by Susan B. (Susan Brownell) Anthony 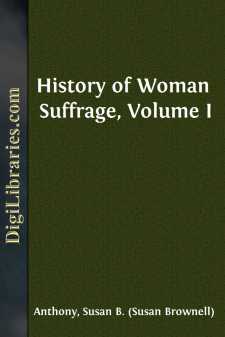 As civilization advances there is a continual change in the standard of human rights. In barbarous ages the right of the strongest was the only one recognized; but as mankind progressed in the arts and sciences intellect began to triumph over brute force. Change is a law of life, and the development of society a natural growth. Although to this law we owe the discoveries of unknown worlds, the inventions of machinery, swifter modes of travel, and clearer ideas as to the value of human life and thought, yet each successive change has met with the most determined opposition. Fortunately, progress is not the result of pre-arranged plans of individuals, but is born of a fortuitous combination of circumstances that compel certain results, overcoming the natural inertia of mankind. There is a certain enjoyment in habitual sluggishness; in rising each morning with the same ideas as the night before; in retiring each night with the thoughts of the morning. This inertia of mind and body has ever held the multitude in chains. Thousands have thus surrendered their most sacred rights of conscience. In all periods of human development, thinking has been punished as a crime, which is reason sufficient to account for the general passive resignation of the masses to their conditions and environments.

Again, "subjection to the powers that be" has been the lesson of both Church and State, throttling science, checking invention, crushing free thought, persecuting and torturing those who have dared to speak or act outside of established authority. Anathemas and the stake have upheld the Church, banishment and the scaffold the throne, and the freedom of mankind has ever been sacrificed to the idea of protection. So entirely has the human will been enslaved in all classes of society in the past, that monarchs have humbled themselves to popes, nations have knelt at the feet of monarchs, and individuals have sold themselves to others under the subtle promise of "protection"—a word that simply means release from all responsibility, all use of one's own faculties—a word that has ever blinded people to its true significance. Under authority and this false promise of "protection," self-reliance, the first incentive to freedom, has not only been lost, but the aversion of mankind for responsibility has been fostered by the few, whose greater bodily strength, superior intellect, or the inherent law of self-development has impelled to active exertion. Obedience and self-sacrifice—the virtues prescribed for subordinate classes, and which naturally grow out of their condition—are alike opposed to the theory of individual rights and self-government. But as even the inertia of mankind is not proof against the internal law of progress, certain beliefs have been inculcated, certain crimes invented, in order to intimidate the masses. Hence, the Church made free thought the worst of sins, and the spirit of inquiry the worst of blasphemies; while the State proclaimed her temporal power of divine origin, and all rebellion high treason alike to God and the king, to be speedily and severely punished....