History of the Wars, Books III and IV The Vandalic War 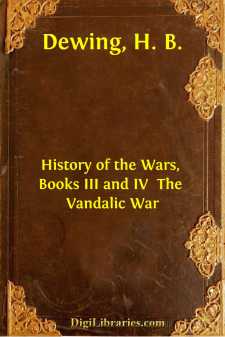 Such, then, was the final outcome of the Persian War for the Emperor Justinian; and I shall now proceed to set forth all that he did against the Vandals and the Moors. But first shall be told whence came the host of the Vandals when they descended upon the land of the Romans. After Theodosius, the Roman Emperor, had departed from the world, having proved himself one of the most just of men and an able warrior, his kingdom was taken over by his two sons, Arcadius, the elder, receiving the Eastern portion, and Honorius, the younger, the Western. But the Roman power had been thus divided as far back as the time of Constantine and his sons; for he transferred his government to Byzantium, and making the city larger and much more renowned, allowed it to be named after him.

Now the earth is surrounded by a circle of ocean, either entirely or for the most part (for our knowledge is not as yet at all clear in this matter); and it is split into two continents by a sort of outflow from the ocean, a flow which enters at the western part and forms this Sea which we know, beginning at Gadira and extending all the way to the Maeotic Lake. Of these two continents the one to the right, as one sails into the Sea, as far as the Lake, has received the name of Asia, beginning at Gadira and at the southern of the two Pillars of Heracles. Septem is the name given by the natives to the fort at that point, since seven hills appear there; for "septem" has the force of "seven" in the Latin tongue. And the whole continent opposite this was named Europe. And the strait at that point separates the two continents by about eighty-four stades, but from there on they are kept apart by wide expanses of sea as far as the Hellespont. For at this point they again approach each other at Sestus and Abydus, and once more at Byzantium and Chalcedon as far as the rocks called in ancient times the "Dark Blue Rocks," where even now is the place called Hieron. For at these places the continents are separated from one another by a distance of only ten stades and even less than that.

Now the distance from one of the Pillars of Heracles to the other, if one goes along the shore and does not pass around the Ionian Gulf and the sea called the Euxine but crosses from Chalcedon to Byzantium and from Dryous to the opposite mainland, is a journey of two hundred and eighty-five days for an unencumbered traveller. For as to the land about the Euxine Sea, which extends from Byzantium to the Lake, it would be impossible to tell everything with precision, since the barbarians beyond the Ister River, which they also call the Danube, make the shore of that sea quite impossible for the Romans to traverse—except, indeed, that from Byzantium to the mouth of the Ister is a journey of twenty-two days, which should be added to the measure of Europe by one making the computation. And on the Asiatic side, that is from Chalcedon to the Phasis River, which, flowing from the country of the Colchians, descends into the Pontus, the journey is accomplished in forty days....