History of the Wars, Books I and II The Persian War 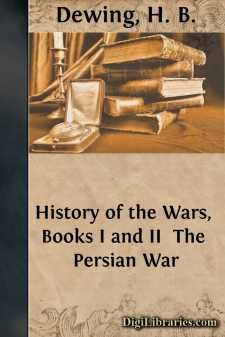 Procopius is known to posterity as the historian of the eventful reign of Justinian (527-565 A.D.), and the chronicler of the great deeds of the general Belisarius. He was born late in the fifth century in the city of Caesarea in Palestine. As to his education and early years we are not informed, but we know that he studied to fit himself for the legal profession. He came as a young man to Constantinople, and seems to have made his mark immediately. For as early as the year 527 he was appointed legal adviser and private secretary to Belisarius, then a very young man who had been serving on the staff of the general Justinian, and had only recently been advanced to the office of general. Shortly after this Justinian was called by his uncle Justinus to share the throne of the Roman Empire, and four months later Justinus died, leaving Justinian sole emperor of the Romans. Thus the stage was set for the scenes which are presented in the pages of Procopius. His own activity continued till well nigh the end of Justinian's life, and he seems to have outlived his hero, Belisarius.

During the eventful years of Belisarius' campaigning in Africa, in Italy, and in the East, Procopius was moving about with him and was an eye-witness of the events he describes in his writings. In 527 we find him in Mesopotamia; in 533 he accompanied Belisarius to Africa; and in 536 he journeyed with him to Italy. He was therefore quite correct in the assertion which he makes rather modestly in the introduction of his history, that he was better qualified than anyone else to write the history of that period. Besides his intimacy with Belisarius it should be added that his position gave him the further advantage of a certain standing at the imperial court in Constantinople, and brought him the acquaintance of many of the leading men of his day. Thus we have the testimony of one intimately associated with the administration, and this, together with the importance of the events through which he lived, makes his record exceedingly interesting as well as historically important. One must admit that his position was not one to encourage impartiality in his presentation of facts, and that the imperial favour was not won by plain speaking; nevertheless we have before us a man who could not obliterate himself enough to play the abject flatterer always, and he gives us the reverse, too, of his brilliant picture, as we shall see presently.

Procopius' three works give us a fairly complete account of the reign of Justinian up till near the year 560 A.D., and he has done us the favour of setting forth three different points of view which vary so widely that posterity has sometimes found it difficult to reconcile them. His greatest work, as well as his earliest, is the History of the Wars, in eight books. The material is not arranged strictly according to chronological sequence, but so that the progress of events may be traced separately in each one of three wars. Thus the first two books are given over to the Persian wars, the next two contain the account of the war waged against the Vandals in Africa, the three following describe the struggle against the Goths in Italy....