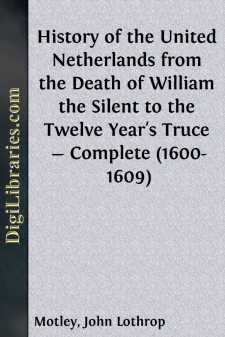 The effect produced in the republic by the defensive and uneventful campaigning of the year 1599 had naturally been depressing. There was murmuring at the vast amount of taxation, especially at the new imposition of one-half per cent. upon all property, and two-and-a-half per cent. on all sales, which seemed to produce so few results. The successful protection of the Isle of Bommel and the judicious purchase of the two forts of Crevecoeur and St. Andrew; early in the following year, together with their garrisons, were not military events of the first magnitude, and were hardly enough to efface the mortification felt at the fact that the enemy had been able so lately to construct one of those strongholds within the territory of the commonwealth.

It was now secretly determined to attempt an aggressive movement on a considerable scale, and to carry the war once for all into the heart of the obedient provinces. It was from Flanders that the Spanish armies drew a great portion of their supplies. It was by the forts erected on the coast of Flanders in the neighbourhood of Ostend that this important possession of the States was rendered nearly valueless. It was by privateers swarming from the ports of Flanders, especially from Nieuport and Dunkirk, that the foreign trade of the republic was crippled, and its intercommunications by river and estuary rendered unsafe. Dunkirk was simply a robbers' cave, a station from which an annual tax was levied upon the commerce of the Netherlands, almost sufficient, had it been paid to the national treasury instead of to the foreign freebooters, to support the expenses of a considerable army.

On the other hand the condition of the archdukes seemed deplorable. Never had mutiny existed before in so well-organised and definite a form even in the Spanish Netherlands.

Besides those branches of the "Italian republic," which had been established in the two fortresses of Crevecoeur and St. Andrew, and which had already sold themselves to the States, other organisations quite as formidable existed in various other portions of the obedient provinces. Especially at Diest and Thionville the rebellious Spaniards and Italians were numbered by thousands, all veterans, well armed, fortified in strong cities; and supplying themselves with perfect regularity by contributions levied upon the peasantry, obeying their Eletto and other officers with exemplary promptness; and paying no more heed to the edicts or the solicitations of the archduke than if he had been the Duke of Muscovy.

The opportunity seemed tempting to strike a great blow. How could Albert and Isabella, with an empty exchequer and a mutinous army, hope either to defend their soil from attack or to aim a counter blow at the republic, even if, the republic for a season should be deprived of a portion of its defenders?

The reasoning was plausible, the prize tempting. The States-General, who habitually discountenanced rashness, and were wont to impose superfluous restraints upon the valiant but discreet Lewis William, and upon the deeply pondering but energetic Maurice, were now grown as ardent as they had hitherto been hesitating. In the early days of June it was determined in secret session to organize a great force in Holland and Zeeland, and to embark suddenly for Nieuport, to carry that important position by surprise or assault, and from that basis to redeem Dunkirk. The possession of these two cities, besides that of Ostend, which had always been retained by the Republic, would ensure the complete subjugation of Flanders. The trifling force of two thousand men under Rivas—all that the archduke then had in that province—and the sconces and earthworks which had been constructed around Ostend to impede the movements and obstruct the supplies of the garrison, would be utterly powerless to prevent the consummation of the plan....