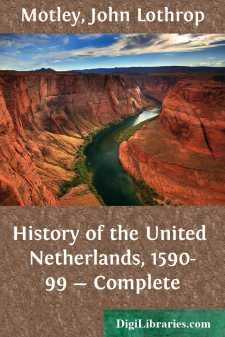 The dagger of Jacques Clement had done much, and was likely to do more, to change the face of Europe. Another proof was afforded that assassination had become a regular and recognised factor in the political problems of the sixteenth century. Another illustration was exhibited of the importance of the individual—even although that individual was in himself utterly despicable—to the working out of great historical results. It seemed that the murder of Henry III.—that forlorn caricature of kingship and of manhood—was likely to prove eminently beneficial to the cause of the Netherland commonwealth. Five years earlier, the murder of William the Silent had seemed to threaten its very existence.

For Philip the Prudent, now that France was deprived of a head, conceived that the time had arrived when he might himself assume the sovereignty of that kingdom. While a thing of straw, under the name of Charles X. and shape of a Cardinal Bourbon, was set up to do battle with that living sovereign and soldier, the heretic Bearnese, the Duke of Parma was privately ordered to bend all his energies towards the conquest of the realm in dispute, under pretence of assisting the Holy League.

Accordingly, early in the year 1590, Alexander concentrated a considerable force on the French frontier in Artois and Hainault, apparently threatening Bergen-op-Zoom and other cities in South Holland, but in reality preparing to invade France. The Duke of Mayenne, who had assumed the title of lieutenant-general of that kingdom, had already visited him at Brussels in order to arrange the plan of the campaign.

While these measures were in preparation, an opportunity was likely to be afforded to the Netherlanders of striking a blow or two for liberty and independence; now that all the force that possibly could be spared was to be withdrawn by their oppressors and to be used for the subjugation of their neighbours. The question was whether there would be a statesman and a soldier ready to make use of this golden opportunity.

There was a statesman ripe and able who, since the death of the Taciturn, had been growing steadily in the estimation of his countrymen and who already was paramount in the councils of the States-General. There was a soldier, still very young, who was possessed of the strongest hereditary claims to the confidence and affection of the United Provinces and who had been passing a studious youth in making himself worthy of his father and his country. Fortunately, too, the statesman and the soldier were working most harmoniously together. John of Olden-Barneveld, with his great experience and vast and steady intellect, stood side by side with young Maurice of Nassau at this important crisis in the history of the new commonwealth.

At length the twig was becoming the tree—'tandem fit surculus arbor'—according to the device assumed by the son of William the Silent after his father's death.

The Netherlands had sore need of a practical soldier to contend with the scientific and professional tyrants against whom they had so long been struggling, and Maurice, although so young, was pre-eminently a practical man. He was no enthusiast; he was no poet. He was at that period certainly no politician. Not often at the age of twenty has a man devoted himself for years to pure mathematics for the purpose of saving his country. Yet this was Maurice's scheme. Four years long and more, when most other youths in his position and at that epoch would have been alternating between frivolous pleasures and brilliant exploits in the field, the young prince had spent laborious days and nights with the learned Simon Stevinus of Bruges. The scientific work which they composed in common, the credit of which the master assigned to the pupil, might have been more justly attributed perhaps to the professor than to the prince, but it is certain that Maurice was an apt scholar....