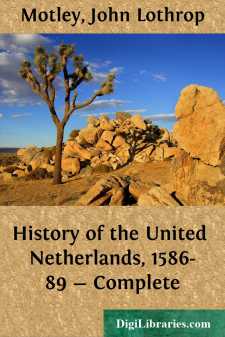 Five great rivers hold the Netherland territory in their coils. Three are but slightly separated—the Yssel, Waal, and ancient Rhine, while the Scheldt and, Meuse are spread more widely asunder. Along each of these streams were various fortified cities, the possession of which, in those days, when modern fortification was in its infancy, implied the control of the surrounding country. The lower part of all the rivers, where they mingled with the sea and became wide estuaries, belonged to the Republic, for the coasts and the ocean were in the hands of the Hollanders and English. Above, the various strong places were alternately in the hands of the Spaniards and of the patriots. Thus Antwerp, with the other Scheldt cities, had fallen into Parma's power, but Flushing, which controlled them all, was held by Philip Sidney for the Queen and States. On the Meuse, Maastricht and Roermond were Spanish, but Yenloo, Grave, Meghem, and other towns, held for the commonwealth. On the Waal, the town of Nymegen had, through the dexterity of Martin Schenk, been recently transferred to the royalists, while the rest of that river's course was true to the republic. The Rhine, strictly so called, from its entrance into Netherland, belonged to the rebels. Upon its elder branch, the Yssel, Zutphen was in Parma's hands, while, a little below, Deventer had been recently and adroitly saved by Leicester and Count Meurs from falling into the same dangerous grasp.

Thus the triple Rhine, after it had crossed the German frontier, belonged mainly, although not exclusively, to the States. But on the edge of the Batavian territory, the ancient river, just before dividing itself into its three branches, flowed through a debatable country which was even more desolate and forlorn, if possible, than the land of the obedient Provinces.

This unfortunate district was the archi-episcopal electorate of Cologne. The city of Cologne itself, Neusz, and Rheinberg, on the river, Werll and other places in Westphalia and the whole country around, were endangered, invaded, ravaged, and the inhabitants plundered, murdered, and subjected to every imaginable outrage, by rival bands of highwaymen, enlisted in the support of the two rival bishops—beggars, outcasts, but high-born and learned churchmen both—who disputed the electorate.

At the commencement of the year a portion of the bishopric was still in the control of the deposed Protestant elector Gebhard Truchsess, assisted of course by the English and the States. The city of Cologne was held by the Catholic elector, Ernest of Bavaria, bishop of Liege; but Neusz and Rheinberg were in the hands of the Dutch republic.

The military operations of the year were, accordingly, along the Meuse, where the main object of Parma was to wrest Grave From the Netherlands; along the Waal, where, on the other hand, the patriots wished to recover Nymegen; on the Yssel, where they desired to obtain the possession of Zutphen; and in the Cologne electorate, where the Spaniards meant, if possible, to transfer Neusz and Rheinberg from Truchsess to Elector Ernest. To clear the course of these streams, and especially to set free that debatable portion of the river-territory which hemmed him in from neutral Germany, and cut off the supplies from his starving troops, was the immediate design of Alexander Farnese.

Nothing could be more desolate than the condition of the electorate. Ever since Gebhard Truchsess had renounced the communion of the Catholic Church for the love of Agnes Mansfeld, and so gained a wife and lost his principality, he had been a dependant upon the impoverished Nassaus, or a supplicant for alms to the thrifty Elizabeth. The Queen was frequently implored by Leicester, without much effect, to send the ex-elector a few hundred pounds to keep him from starving, as "he had not one groat to live upon," and, a little later, he was employed as a go-between, and almost a spy, by the Earl, in his quarrels with the patrician party rapidly forming against him in the States.

At Godesberg—the romantic ruins of which stronghold the traveller still regards with interest, placed as it is in the midst of that enchanting region where Drachenfels looks down on the crumbling tower of Roland and the convent of Nonnenwerth—the unfortunate Gebhard had sustained a conclusive defeat. A small, melancholy man, accomplished, religious, learned, "very poor but very wise," comely, but of mean stature, altogether an unlucky and forlorn individual, he was not, after all, in very much inferior plight to that in which his rival, the Bavarian bishop, had found himself....