History of the Philippine Islands 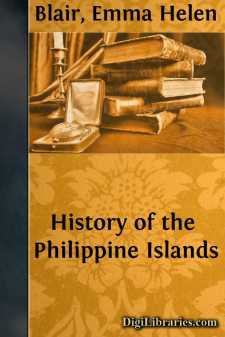 Add to My Favorites
Published: 10 years ago
Downloads: 96
Rating: (0 Votes)

In this volume is presented the first installment of Dr. Antonio de Morga's Sucesos de las Islas Filipinas. Events here described cover the years 1493-1603, and the history proper of the islands from 1565. Morga's work is important, as being written by a royal official and a keen observer and participator in affairs. Consequently he touches more on the practical everyday affairs of the islands, and in his narrative shows forth the policies of the government, its ideals, and its strengths and weaknesses. His book is written in the true historic spirit, and the various threads of the history of the islands are followed systematically. As being one of the first of published books regarding the Philippines, it has especial value. Political, social, and economic phases of life, both among the natives and their conquerors, are treated. The futility of the Spanish policy in making external expeditions, and its consequent neglect of internal affairs; the great Chinese question; the growth of trade; communication with Japan; missionary movements from the islands to surrounding countries; the jealous and envious opposition of the Portuguese; the dangers of sea-voyages: all these are portrayed vividly, yet soberly. Morga's position in the state allowed him access to many documents, and he seems to have been on general good terms with all classes, so that he readily gained a knowledge of facts. The character of Morga's work and his comprehensive treatment of the history, institutions, and products of the Philippines, render possible and desirable the copious annotations of this and the succeeding volume. These annotations are contributed in part by those of Lord Stanley's translation of Morga, and those of Rizal's reprint, while the Recopilacion de leyes de Indias furnishes a considerable number of laws.

The book is preceded by the usual licenses and authorizations, followed by the author's dedication and introduction. In the latter he declares his purpose in writing his book to be that "the deeds achieved by our Spaniards in the discovery, conquest, and conversion of the Filipinas Islands—as well as various fortunes that they have had from time to time in the great kingdoms and among the pagan peoples surrounding the islands" may be known. The first seven chapters of the book treat of "discoveries, conquests, and other events … until the death of Don Pedro de Acuna." The eighth chapter treats of the natives, government, conversion, and other details.

In rapid survey the author passes the line of demarcation of Alexander VI, and the voyages of Magalhaes and Elcano, Loaisa, Villalobos, and others, down to the expedition of Legazpi. The salient points of this expedition are briefly outlined, his peaceful reception by Tupas and the natives, but their later hostility, because the Spaniards "seized their provisions," their defeat, the Spaniards' first settlement in Sebu, and the despatching of the advice-boat to Nueva Espana to discover the return passage, and inform the viceroy of the success of the expedition....