History of the Negro Race in America from 1619 to 1880. Vol. 2 Negroes as Slaves, as Soldiers, and as Citizens 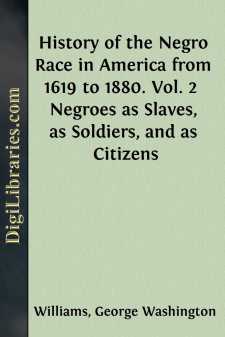 Commencement of the Nineteenth Century.—Slave Population of 1800.—Memorial Presented to Congress calling Attention to the Slave-trade to the Coast of Guinea.—Georgia cedes the Territory lying West of her to become a State.—Ohio adopts a State Constitution.—William Henry Harrison appointed Governor of the Territory of Indiana.—An Act of Congress prohibiting the Importation of Slaves into the United States or Territories.—Slave Population of 1810.—Mississippi applies for Admission into the Union with a Slave Constitution.—Congress besieged by Memorials urging more specific Legislation against the Slave-trade.—Premium offered to the Informer of every illegally imported African seized within the United States.—Circular Letters sent to the Naval Officers on the Seacoast of the Slave-holding States.—President Monroe's Message to Congress on the Question of Slavery.—Petition presented by the Missouri Delegates for the Admission of that State into the Union.—The Organization of the Arkansas Territory.—Resolutions passed for the Restriction of Slavery in New States.—The Missouri Controversy.—The Organization of the Anti-slavery Societies.—An Act for the Gradual Abolition Of Slavery in New Jersey.—Its Provisions.—The Attitude of the Northern Press on the Slavery Question.—Slave Population of 1820.—Anti-slavery Sentiment at the North.

THE nineteenth century opened auspiciously for the cause of the Negro. Although slavery had ceased to exist in Massachusetts and Vermont, the census of 1800 showed that the slave population in the other States was steadily on the increase. In the total population of 5,305,925, there were 893,041 slaves. The subjoined table exhibits the number of slaves in each of the slave-holding States in the year 1800.

On the 2d of January, 1800, a number of Colored citizens of the city and county of Philadelphia presented a memorial to Congress, through the delegate from that city, Mr. Waln, calling attention to the slave-trade to the coast of Guinea. The memorial charged that the slave-trade was clandestinely carried on from various ports of the United States contrary to law; that under this wicked practice free Colored men were often seized and sold as slaves; and that the fugitive-slave law of 1793 subjected them to great inconvenience and severe persecutions. The memorialists did not request Congress to transcend their authority respecting the slave-trade, nor to emancipate the slaves, but only to prepare the way, so that, at an early period, the oppressed might go free.

Upon a motion by Mr. Waln for the reference of the memorial to the Committee on the Slave-trade, Rutledge, Harper, Lee, Randolph, and other Southern members, made speeches against such a reference. They maintained that the petition requested Congress to take action on a question over which they had no control. Waln, Thacher, Smilie, Dana, and Gallatin contended that there were portions of the petition that came within the jurisdiction of the Constitution, and, therefore, ought to be received and acted upon. Mr. Rutledge demanded the yeas and nays; but in such a spirit as put Mr. Waln on his guard, so he withdrew his motion, and submitted another one by which such parts of the memorial as came within the jurisdiction of Congress should be referred. Mr. Rutledge raised a point of order on the motion of the gentleman from Pennsylvania that a "part" of the memorial could not be referred, but was promptly overruled. Mr. Gray, of Virginia, moved to amend by adding a declaratory clause that the portions of the memorial, not referred, inviting Congress to exercise authority not delegated, "have a tendency to create disquiet and jealousy, and ought, therefore, to receive the pointed disapprobation of this House." After some discussion, it was finally agreed to strike out the last clause and insert the following: "ought therefore to receive no encouragement or countenance from this House." The call of the roll resulted in the adoption of the amendment, with but one vote in the negative by Mr....