History of the Negro Race in America From 1619 to 1880. Vol 1 Negroes as Slaves, as Soldiers, and as Citizens 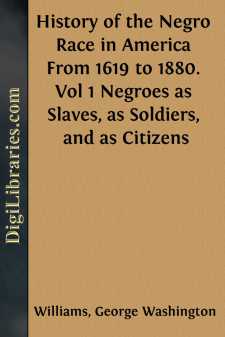 CHAPTER I. THE UNITY OF MANKIND.

The Biblical Argument.—One Race and One Language.— One Blood.—The Curse of Canaan.

DURING the last half-century, many writers on ethnology, anthropology, and slavery have strenuously striven to place the Negro outside of the human family; and the disciples of these teachers have endeavored to justify their views by the most dehumanizing treatment of the Negro. But, fortunately for the Negro and for humanity at large, we live now in an epoch when race malice and sectional hate are disappearing beneath the horizon of a brighter and better future. The Negro in America is free. He is now an acknowledged factor in the affairs of the continent; and no community, state, or government, in this period of the world's history, can afford to be indifferent to his moral, social, intellectual, or political well-being.

It is proposed, in the first place, to call the attention to the absurd charge that the Negro does not belong to the human family. Happily, there are few left upon the face of the earth who still maintain this belief.

In the first chapter of the Book of Genesis it is clearly stated that "God created man," "male and female created he them;" that "the Lord God formed man of the dust of the ground, and breathed into his nostrils the breath of life; and man became a living soul;" and that "the Lord God took the man, and put him into the Garden of Eden to dress it and to keep it." It is noticeable that the sacred historian, in every reference to Adam, speaks of him as "man;" and that the divine injunction to them was,—Adam and Eve,—"Be fruitful, and multiply, and replenish the earth, and subdue it; and have dominion over the fish of the sea, and over the fowl of the air, and over every living thing that moveth upon the earth." As among the animals, so here in the higher order, there were two,—a pair,—"male and female," of the human species. We may begin with man, and run down the scale, and we are sure to find two of a kind, "male and female." This was the divine order. But they were to "be fruitful," were to "replenish the earth." That they did "multiply," we have the trustworthy testimony of God; and it was true that man and beast, fowl and fish, increased. We read that after their expulsion from the Garden of Eden, Eve bore Adam a family. Cain and Abel; and that they "peopled the earth."

After a number of years we find that wickedness increased in the earth; so much so that the Lord was provoked to destroy the earth with a flood, with the exception of Noah, his wife, his three sons and their wives,—eight souls in all. Of the animals, two of each kind were saved.

But the most interesting portion of Bible history comes after the Flood. We then have the history of the confusion of tongues, and the subsequent and consequent dispersion of mankind. In the eleventh chapter and first verse of Genesis it is recorded: "And the whole earth was of one language, and of one speech." "The whole earth" here means all the inhabitants of the earth,—all mankind. The medium of communication was common....