History of Steam on the Erie Canal 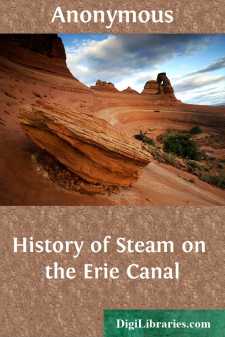 During the maple sugar season of the spring of 1858, a well-to-do farmer, of western New York, whittled out a spiral or augur-like screw-propeller, in miniature, which he thought admirably adapted to the canal. He soon after went to Buffalo, and contracted for a boat to be built, with two of his Archimedean screws for propulsion by steam.

Although advised by his builders to substitute the common four-bladed propellers, he adhered to his original design, and with one propeller at either side of the rudder—called "twin-propellers"—she was soon ready for duty. She is the vessel known to history as the Charles Wack.

She carried three-fourths cargo and towed another boat with full cargo, and made the trip from Buffalo to West Troy in seven days, total time, averaging two miles per hour. But she returned from Troy to Buffalo, with half freight, in four days and sixteen hours, net time; averaging three and one-twelfth miles per hour, without tow.

This initiated the series of steamers from 1858 to 1862, and, with others that soon followed, created a general enthusiasm in behalf of steam transportation, which led to a trip through the canal that fall, on a chartered steam-tug, by the Governor of the State, the Canal Board, and other notables, and with public receptions, speeches, &c., at different cities along the route.

That boat was soon followed by the S. B. Ruggles, a first-class steam canal-boat, built by the Hon. E. S. Prosser, of Buffalo, with a first-class modern propeller, and with double the engine capacity of the former.

The P. L. Sternburg soon followed, and was a first-class boat, with modern twin-propellers, but with less engine capacity than the Wack.

The same season there were some local steamers built to run regularly between different cities on the line of the canal.

The following season of 1859 was the most active year the Erie Canal has ever known in regard to steam.

The C. Wack was sold to Mr. Prosser, who took out her Archimedean propellers, and substituted a modern propeller, and doubled her engine capacity, and reproduced her as the City of Buffalo.

The Gold Hunter was produced by the Western Transportation Company, of Buffalo. She was a short, oblong tub, with a square, box-like bow, and rounded stern, designed only to carry machinery and coal, and was to be recessed into the stern of ordinary horse-boats by cutting away an equivalent space therefrom. She was designed to make a trip on the canal, and be immediately transferred to another boat for return trip, thus to avoid the usual loss of time at the termini of the canal. She was abandoned after a brief trial.

The canal-boat Niagara had the Cathcart propeller supplied, which consisted of a union of the propeller and rudder by a universal joint in the shaft, and so adjusted as to unite them for steerage purposes. This design was tried on the steamer Cathcart, upon the Chesapeake and Ohio Canal, in 1858, and with considerable newspaper eclat.

The Rotary, of New York, was a new steamer for freighting purposes, with a rotary engine and common propeller....