History of Religion A Sketch of Primitive Religious Beliefs and Practices, and of the Origin and Character of the Great Systems 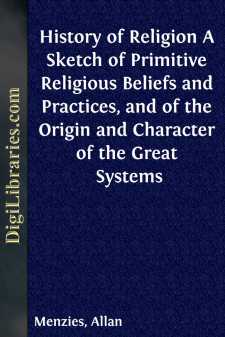 The science to which this little volume is devoted is a comparatively new one. It is scarcely half a century since the attention of Western Europe began to fix itself seriously on the great religions of the East, and the study of these ancient systems aroused reflection on the great facts that the world possesses not one religion only, but several, nay, many religions, and that these exhibit both great differences and great resemblances. The agitation of mind then awakened by the thought that other faiths might be compared with Christianity, has to a large extent passed away; and on the other hand fresh fields of knowledge have been opened to the student of the worships of mankind. By new methods of research the religions of Greece and Rome have come to be known as they never were before; and all the other religions of which we formerly knew anything have been led to tell their stories in a new way. A new study—that of the earliest human life on the earth—has brought to light many primitive beliefs and practices, which seem to explain early religious ideas; and the accounts of missionaries and others about savage tribes now existing in different parts of the world, are seen to be full of a significance which was not noticed formerly. We are thus in a very different position from our fathers for studying the religion of the world as a whole. To them their own religion was the true one and all the others were false. Calvin speaks of the "immense welter of errors" in which the whole world outside of Christianity is immersed; it is unnecessary for him to deal with these errors, he can at once proceed to set forth the true doctrine. The belief of the early fathers of the Church, that all worships but those of Judaism and Christianity were directed to demons, and that the demons bore sway in them, practically prevailed till our own day; and it could not but do so, since no other religions than these were really known. That ignorance has ceased, and we are responsible for forming a view of the subject according to the light that has been given us.

The science of religion, though of such recent origin, has already passed beyond its earliest stage, as a reference even to its earlier and its later names will show. "Comparative Religion" was the title given at first to the combined study of various religions. What had to be done, it was thought, was to compare them. The facts about them had to be collected, the systems arranged according to the best information procurable, and then laid side by side, that it might be seen what features they had in common and what each had to distinguish it from the others. Work of this kind is still abundantly necessary. The collection of materials and the specifying of the similarities and dissimilarities of the various faiths will long occupy many workers.

Unity of all Religion.—But recent works on the religions of the world regarded as a whole have been called "histories." We have the well-known History of Religion of M....