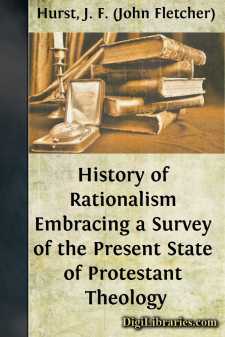 There were no prefatory remarks to the first and second editions of the following work. It was thought, when the printer made his final call for copy, that a preface might be written with more propriety if the public should indicate sufficient interest in the book to make its improvement and enlargement necessary. That interest, owing to the theme rather than the treatment, has not been withheld. The investigation of the subject was pursued in the midst of varied and pressing pastoral duties, with a pleasure which no reader of the result of the labor can enjoy; for, first, the author felt that Rationalism was soon to be the chief topic of theological inquiry in the Anglo-Saxon lands; and, second, he regarded the doubt, not less than the faith, of his fellow men as entitled to far more respect and patient investigation than it had usually received at the hands of orthodox inquirers.

The author would probably never have studied the genetic development of Rationalism in Germany, and its varied forms in other countries, if he had not been a personal witness to the ruin it had wrought in the land of Luther, Spener, and Zinzendorf. In compliance with the instruction of a trusted medical adviser, he sailed for Germany in the summer of 1856, as a final resort for relief from serious pulmonary disease. But, through the mercy of God, he regained health so rapidly that he was enabled to matriculate in the University of Halle in the following autumn, and to be a daily attendant upon the lectures of such men as Tholuck, Julius Müller, Jacobi, and Roediger. From some theologians he heard Rationalism defended with an energy worthy of Wolff and Semler; from others with a devotion worthy of the beloved Neander. In the railroad car, the stage, the counting-room, the workshop, the parlor, and the peasant-hut, Rationalism was found still lingering with a strong, though relaxing grasp. The evangelical churches were attended by only a few listless hearers. His prayer to God was, "May the American Church never be reduced to this sad fate." The history of that movement, resulting in such actual disaster to some lands and threatened ruin to others, took a deep hold upon his mind; and if he has failed in any respect to trace it with an impartial pen, his hope is that his failure will not cause any bright color of the truth to be obscured for a moment. For no man and no cause can ultimately triumph by giving an undue prominence to favorite party or principles; it is only by justice to all that the truth can win its unfading laurels.

Criticism was to have been expected, from the very nature of the topic of investigation. But the author has endeavored, as a student at the feet of his judges, to derive the largest possible benefit from criticism. No word of censure, however wide of the mark, has been unwelcome to him, whether from the sceptical or orthodox press. To all questioned passages he has given a careful re-examination, in some instances finding cause for alteration, but in others seeing his ground more strongly sustained than was at first imagined....