History of Farming in Ontario 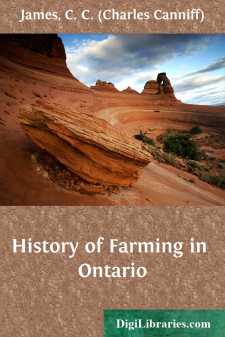 HISTORY OF FARMINGThe Land and the People

From the most southern point of Ontario on Lake Erie, near the 42nd parallel of latitude, to Moose Factory on James Bay, the distance is about 750 miles. From the eastern boundary on the Ottawa and St Lawrence Rivers to Kenora at the Manitoba boundary, the distance is about 1000 miles. The area lying within these extremes is about 220,000 square miles. In 1912 a northern addition of over 100,000 square miles was made to the surface area of the province, but it is doubtful whether the agricultural lands will thereby be increased. Of this large area about 25,000,000 acres are occupied and assessed, including farm lands and town and city sites. It will be seen, therefore, that only a small fraction of the province has, as yet, been occupied. Practically all the occupied area lies south of a line drawn through Montreal, Ottawa, and Sault Ste Marie, and it forms part of the great productive zone of the continent.

The next point to be noted is the irregularity of the boundary-line, the greater portion of which is water—Lakes Superior, Huron, Erie, Ontario, the St Lawrence River, the Ottawa River, James Bay, and Hudson Bay. The modifying effect of great bodies of water must be considered in studying the agricultural possibilities of Ontario.

Across this great area of irregular outline there passes a branch of the Archæan rocks running in a north-western direction and forming a watershed, which turns some of the streams to Hudson Bay and the others to the St Lawrence system. An undulating surface has resulted, more or less filled with lakes, and almost lavishly supplied with streams, which are of prime importance for agricultural life and of incalculable value for commercial purposes. To these old rocks which form the backbone of the province may be traced the origin of the large stretches of rich soil with which the province abounds.

An examination of the map, and even a limited knowledge of the geological history of the province, will lead to the conclusion that in Ontario there must be a wide range in the nature and composition of the soils and a great variety in the climatic conditions. These conditions exist, and they result in a varied natural production. In the extreme south-western section plants of a semi-tropical nature were to be found in the early days in luxurious growth; while in the extreme north, spruce, somewhat stunted in size and toughened in fibre, are still to be found in vast forests.

It is with the southern section, that lying south of the Laurentian rocks, that our story is mainly concerned, for the occupation and exploitation of the northland is a matter only of recent date. Nature provided conditions for a diversified agriculture. It is to such a land that for over a hundred years people of different nationalities, with their varied trainings and inclinations, have been coming to make their homes. We may expect, therefore, to find a great diversity in the agricultural growth of various sections, due partly to the variety of natural conditions and partly to the varied agricultural training of the settlers in their homelands....