by A. S. (Angelo Solomon) Rappoport 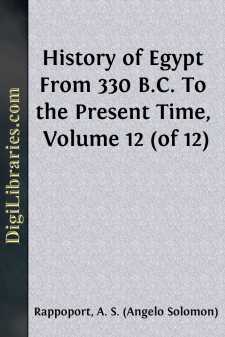 The Ideal of the Crusader: Saladin's Campaign: Richard I. in Palestine: Siege of Damietta: St. Louis in Egypt: The Mamluks: Beybars' Policy.

The traditional history of the Christian Church has generally maintained that the Crusades were due solely to religious influence and sprang from ideal and moral motives: those hundreds of thousands of warriors who went out to the East were religious enthusiasts, prompted by the pious longings of their hearts, and Peter the Hermit, it was claimed, had received a divine message to call Christendom to arms, to preach a Crusade against the unbelievers and take possession of the Holy Sepulchre. That such ideal reasons should be attributed to a war like the Crusades, of a wide and far-reaching influence on the political and intellectual development of mediæval Europe, is not at all surprising. In the history of humanity there have been few wars in which the combatants on both sides were not convinced that they had drawn their swords for some noble purpose, for the cause of right and justice. That the motives prompting the vast display of arms witnessed during the Crusades, that the wanderings of those crowds to the East during two centuries, and the cruelties committed by the saintly warriors on their way to the Holy Sepulchre, should be attributed exclusively to ideal and religious sources is therefore quite natural. It is not to be denied that there was a religious factor in the Crusades; but that the religious motive was not the sole incentive has now been agreed upon by impartial historians; and in so far as the motives animating the Crusaders were religious motives, we are to look to powerful influences which gradually made themselves felt from without the ecclesiastical organisations. It was by no means a movement which the Church alone had called into being. On the contrary, only when the movement had grown ripe did Gregory VII. hasten to take steps to enable the Church to control it. The idea of a Crusade for the glory of religion had not sprung from the tenets of Christianity; it was given to mediaeval Europe by the Muhammedans.

History can hardly boast of another example of so gigantic a conquest during so short a period as that gained by the first adherents of Islam. Like the fiery wind of the desert, they had broken from their retreats, animated by the promises of the Prophet, and spread the new doctrine far and wide. In 653 the scimitar of the Saracens enclosed an area as large as the Roman Empire under the Cæsars. Barely forty years elapsed after the death of the Prophet when the armies of Islam reached the Atlantic. Okba, the wild and gallant leader, rode into the sea on the western shore of Africa, and, whilst the seething waves reached to the saddle of his camel, he exclaimed: "Allah, I call thee as witness that I should have carried the knowledge of Thy name still farther, if these waves threatening to swallow me would not have prevented me from doing so." Not long after this, the flag of the crescent was waving from the Pyrenees to the Chinese mountains....