History of Egypt, Chaldea, Syria, Babylonia, and Assyria in the Light of Recent Discovery 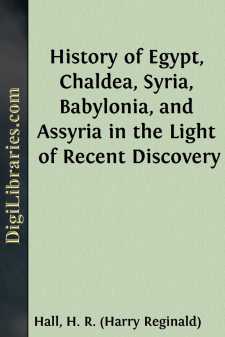 Add to My Favorites
Published: 9 years ago
Downloads: 139
Rating: (0 Votes)

During the last ten years our conception of the beginnings of Egyptian antiquity has profoundly altered. When Prof. Maspero published the first volume of his great Histoire Ancienne des Peuples des l'Orient Classique, in 1895, Egyptian history, properly so called, still began with the Pyramid-builders, Sne-feru, Khufu, and Khafra (Cheops and Chephren), and the legendary lists of earlier kings preserved at Abydos and Sakkara were still quoted as the only source of knowledge of the time before the IVth Dynasty. Of a prehistoric Egypt nothing was known, beyond a few flint flakes gathered here and there upon the desert plateaus, which might or might not tell of an age when the ancestors of the Pyramid-builders knew only the stone tools and weapons of the primeval savage.

Now, however, the veil which has hidden the beginnings of Egyptian civilization from us has been lifted, and we see things, more or less, as they actually were, unobscured by the traditions of a later day. Until the last few years nothing of the real beginnings of history in either Egypt or Mesopotamia had been found; legend supplied the only material for the reconstruction of the earliest history of the oldest civilized nations of the globe. Nor was it seriously supposed that any relics of prehistoric Egypt or Mesopotamia ever would be found. The antiquity of the known history of these countries already appeared so great that nobody took into consideration the possibility of our discovering a prehistoric Egypt or Mesopotamia; the idea was too remote from practical work. And further, civilization in these countries had lasted so long that it seemed more than probable that all traces of their prehistoric age had long since been swept away. Yet the possibility, which seemed hardly worth a moment's consideration in 1895, is in 1905 an assured reality, at least as far as Egypt is concerned. Prehistoric Babylonia has yet to be discovered. It is true, for example, that at Mukay-yar, the site of ancient Ur of the Chaldees, burials in earthenware coffins, in which the skeletons lie in the doubled-up position characteristic of Neolithic interments, have been found; but there is no doubt whatever that these are burials of a much later date, belonging, quite possibly, to the Parthian period. Nothing that may rightfully be termed prehistoric has yet been found in the Euphrates valley, whereas in Egypt prehistoric antiquities are now almost as well known and as well represented in our museums as are the prehistoric antiquities of Europe and America.

With the exception of a few palasoliths from the surface of the Syrian desert, near the Euphrates valley, not a single implement of the Age of Stone has yet been found in Southern Mesopotamia, whereas Egypt has yielded to us the most perfect examples of the flint-knapper's art known, flint tools and weapons more beautiful than the finest that Europe and America can show. The reason is not far to seek. Southern Mesopotamia is an alluvial country, and the ancient cities, which doubtless mark the sites of the oldest settlements in the land, are situated in the alluvial marshy plain between the Tigris and the Euphrates; so that all traces of the Neolithic culture of the country would seem to have disappeared, buried deep beneath city-mounds, clay and marsh....