History of Egypt, Chald?a, Syria, Babylonia, and Assyria, Volume 8 (of 12) 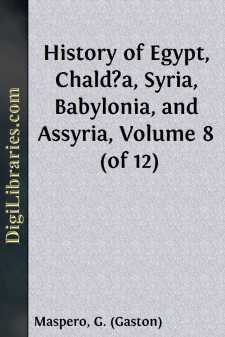 The struggle of Sennacherib with Judæa and Egypt—Destruction of Babylon.

Sennacherib either failed to inherit his father's good fortune, or lacked his ability.* He was not deficient in military genius, nor in the energy necessary to withstand the various enemies who rose against him at widely removed points of his frontier, but he had neither the adaptability of character nor the delicate tact required to manage successfully the heterogeneous elements combined under his sway.

* The two principal documents for the reign of Sennacheribare engraved on cylinders: the Taylor Cylinder and theBellino Cylinder, duplicates of which, more or less perfect,exist in the collections of the British Museum. The TaylorCylinder, found at Kouyunjik or Usebi-Yunus, contains thehistory or the first eight years of this reign; the BellinoCylinder treats of the two first years of the reign.

He lacked the wisdom to conciliate the vanquished, or opportunely to check his own repressive measures; he destroyed towns, massacred entire tribes, and laid whole tracts of country waste, and by failing to repeople these with captive exiles from other nations, or to import colonists in sufficient numbers, he found himself towards the end of his reign ruling over a sparsely inhabited desert where his father had bequeathed to him flourishing provinces and populous cities. His was the system of the first Assyrian conquerors, Shalmaneser III. and Assur-nazir-pal, substituted for that of Tiglath-pileser III. and Sargon. The assimilation of the conquered peoples to their conquerors was retarded, tribute was no longer paid regularly, and the loss of revenue under this head was not compensated by the uncertain increase in the spoils obtained by war; the recruiting of the army, rendered more difficult by the depopulation of revolted districts, weighed heavier still on those which remained faithful, and began, as in former times, to exhaust the nation. The news of Sargon's murder, published throughout the Eastern world, had rekindled hope in the countries recently subjugated by Assyria, as well as in those hostile to her. Phoenicia, Egypt, Media, and Elam roused themselves from their lethargy and anxiously awaited the turn which events should take at Nineveh and Babylon. Sennacherib did not consider it to his interest to assume the crown of Chaldæa, and to treat on a footing of absolute equality a country which had been subdued by force of arms: he relegated it to the rank of a vassal state, and while reserving the suzerainty for himself, sent thither one of his brothers to rule as king.*

* The events which took place at Babylon at the beginning ofSennacherib's reign are known to us from the fragments ofBerosus, compared with the Canon of Ptolemy and Pinches'Babylonian Canon. The first interregnum in the Canon ofPtolemy (704-702 B.C.) is filled in Pinches' Canon by threekings who are said to have reigned as follows: Sennacherib,two years; Marduk-zâkir-shumu, one month; Merodach-baladan,nine months....
Show more
Show less