History of Egypt, Chald?a, Syria, Babylonia, and Assyria, Volume 7 (of 12) 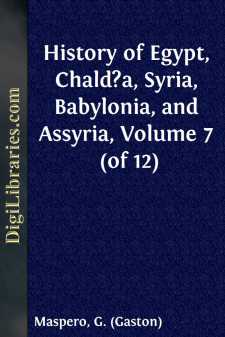 CHAPTER I—THE ASSYRIAN REVIVAL AND THE STRUGGLE FOR SYRIA

Assyria was the first to reappear on the scene of action. Less hampered by an ancient past than Egypt and Chaldæa, she was the sooner able to recover her strength after any disastrous crisis, and to assume again the offensive along the whole of her frontier line.

Image Drawn by Faucher-Gudin, from a bas-relief at Koyunjikof the time of Sennacherib. The initial cut, which is alsoby Faucher-Gudin, represents the broken obelisk of Assur-nazir-pal, the bas-reliefs of which are as yet unpublished.

During the years immediately following the ephemeral victories and reverses of Assurirba, both the country and its rulers are plunged in the obscurity of oblivion. Two figures at length, though at what date is uncertain, emerge from the darkness—a certain Irbarammân and an Assur-nadinakhê II., whom we find engaged in building palaces and making a necropolis. They were followed towards 950 by a Tiglath-pileser II., of whom nothing is known but his name.* He in his turn was succeeded about the year 935 by one Assurdân II., who appears to have concentrated his energies upon public works, for we hear of him digging a canal to supply his capital with water, restoring the temples and fortifying towns. Kammân-nirâri III., who followed him in 912, stands out more distinctly from the mists which envelop the history of this period; he repaired the gate of the Tigris and the adjoining wall at Assur, he enlarged its principal sanctuary, reduced several rebellious provinces to obedience, and waged a successful warfare against the neighbouring inhabitants of Karduniash. Since the extinction of the race of Nebuchadrezzar I., Babylon had been a prey to civil discord and foreign invasion. The Aramaean tribes mingled with, or contiguous to the remnants of the Cossoans bordering on the Persian gulf, constituted possibly, even at this period, the powerful nation of the Kaldâ.**

* Our only knowledge of Tiglath-pileser II. is from a brick,on which he is mentioned as being the grandfather of Rammân-nirâri II.** The names Chaldæa and Chaldæans being ordinarily used todesignate the territory and people of Babylon, I shallemploy the term Kaldu or Kaldâ in treating of the Aramæantribes who constituted the actual Chaldæan nation.

It has been supposed, not without probability, that a certain Simashshikhu, Prince of the Country of the Sea, who immediately followed the last scion of the line of Pashê,* was one of their chiefs. He endeavoured to establish order in the city, and rebuilt the temple of the Sun destroyed by the nomads at Sippar, but at the end of eighteen years he was assassinated. His son Eâmukinshurnu remained at the head of affairs some three to six months; Kashshu-nadinakhê ruled three or six years, at the expiration of which a man of the house of Bâzi, Eulbar-shakinshumi by name, seized upon the crown.** His dynasty consisted of three members, himself included, and it was overthrown after a duration of twenty years by an Elamite, who held authority for another seven.***

* The name of this prince has been read Simbarshiku byPeiser, a reading adopted by Rost; Simbarshiku would havebeen shortened into Sibir, and we should have to identify itwith that of the Sibir mentioned by Assur-nazir-pal in hisAnnals, col....
Show more
Show less