History of Egypt, Chald?a, Syria, Babylonia, and Assyria, Volume 6 (of 12) 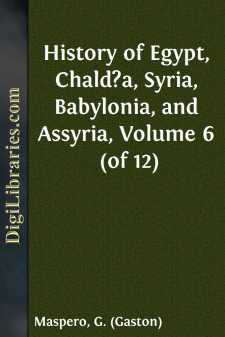 Ramses III.: Manners and Customs—Population—The predominance of Amon and his high priests.

Opposite the Thebes of the living, Khafîtnîbûs, the Thebes of the dead, had gone on increasing in a remarkably rapid manner. It continued to extend in the south-western direction from the heroic period of the XVIIIth dynasty onwards, and all the eminence and valleys were gradually appropriated one after the other for burying-places. At the time of which I am speaking, this region formed an actual town, or rather a chain of villages, each of which was grouped round some building constructed by one or other of the Pharaohs as a funerary chapel. Towards the north, opposite Karnak, they clustered at Drah-abu'l-Neggah around pyramids of the first Theban monarchs, at Qurneh around the mausolæ of Ramses I. and Seti I., and at Sheikh Abd el-Qurneh they lay near the Amenopheum and the Pamonkaniqîmît, or Ramesseum built by Ramses II. Towards the south they diminished in number, tombs and monuments becoming fewer and appearing at wider intervals; the Migdol of Ramses III. formed an isolated suburb, that of Azamît, at Medinet-Habu; the chapel of Isis, constructed by Amenôthes, son of Hapû, formed a rallying-point for the huts of the hamlet of Karka;* and in the far distance, in a wild gorge at the extreme limit of human habitations, the queens of the Ramesside line slept their last sleep.

Each of these temples had around it its enclosing wall of dried brick, and the collection of buildings within this boundary formed the Khîrû, or retreat of some one of the Theban Pharaohs, which, in the official language of the time, was designated the "august Khîrû of millions of years."

Drawn by Boudier, from a photograph by Beato.

A sort of fortified structure, which was built into one of the corners, served as a place of deposit for the treasure and archives, and could be used as a prison if occasion required.*

* This was the hliatmû, the dungeon, frequently mentioned inthe documents bearing upon the necropolis.

The remaining buildings consisted of storehouses, stables, and houses for the priests and other officials. In some cases the storehouses were constructed on a regular plan which the architect had fitted in with that of the temple. Their ruins at the back and sides of the Ramesseum form a double row of vaults, extending from the foot of the hills to the border of the cultivated lands. Stone recesses on the roof furnished shelter for the watchmen.* The outermost of the village huts stood among the nearest tombs. The population which had been gathered together there was of a peculiar character, and we can gather but a feeble idea of its nature from the surroundings of the cemeteries in our own great cities. Death required, in fact, far more attendants among the ancient Egyptians than with us....